Born to wear a white hat

My husband was born to ride horses and wear a white hat. Although in this picture he’s wearing a black hat, I can tell you undoubtedly, I married one of the white hat good guys; top of the heap of the good guys. 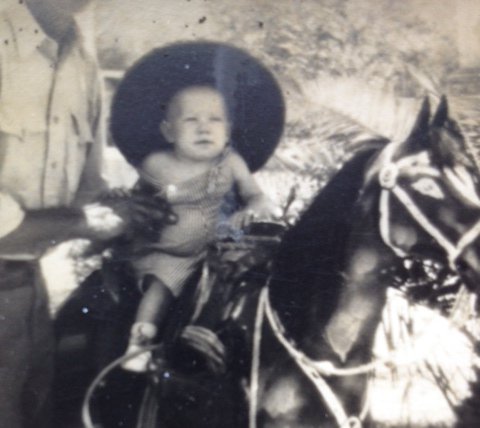 Growing up, he rode his mother’s horses in the barrel races.  Many times he had on a white cowboy hat and festive red, white and black fancy cowboy shirt. He and his trusty pony circled the barrels at top speed.

I didn’t know him then. I didn’t know he was one of the good guys. He might not have known it then either. In actuality, it was later he really could legitimately wear a white hat.

Of course, the good guys aren’t as easily recognizable in the crush of the public. They don’t stand out in the crowd like Roy Rogers on Trigger.

Good guys
I often wonder how it happened I connected with a man who is honest, truthful, hard-working, loving, kind, peaceful and God-centered through and through.

I felt when I married him he had those qualities. However, I’ve known others who thought the same thing and then something went haywire along the way. The wonderful man they married had a flip side, one that pulled him towards infidelity, anger, theft or any of 1,000 other human tendencies.

I had great role models, important men in my life who wore white hats. I had the world’s most Godly father. He was an honest, loving, family man who prayed every day for me and each of our family members. My Papaw was the best grandpa ever in my book, kind, gentle, hard-working.  My great-grandfather was top of his game, as well; a large, huggable man who made sure his grandchildren’s children knew they were special.

It is no wonder that when I fell in love, it was with a man who resembled the character and personality of the special men in my life. There must have been a homing device that led me to Roy and let me know he was one of the good guys.

God couldn’t have chosen a more perfect man to walk alongside my imperfections, to rest when I am restless and up all night wrestling with putting words on paper, to be peaceful when it seems to me the world as we know it is crashing down upon us.

He doesn’t try to understand or figure me out, he has always and only accepted me through thick and thin. (Those who know my story know there’s been lots of both.)

Bad guys
I am well aware of the other type of men; the ones who are in the opposite category; who prey upon girls, who in their blossoming adolescence trust them completely, only to have their innocence shattered. Those type of men masquerade as the good guys.; their white hat is just a façade.

I have known my share of these type of men. I spent years protecting myself from their roaming eyes, eyes that show up even in so-called Christian environments. There should be a different name for these type of men; slimy, despicable, snakes in the grass.

I tried to find some scriptures about good men versus bad men. I wanted to show what God thinks of evil. As one always should do when they study scripture, I had a revelation. God doesn’t see us in terms of good or bad.

God sees us all as less-than-perfect people in desperate need of a savior. The only way any of us, men and women, can be made good is by donning the truly white-as-snow hat that Jesus wears.

“Since we’ve … proved that we are utterly incapable of living the glorious lives God wills for us, God did it for us. Out of sheer generosity he put us in right standing with Himself. A pure gift. He got us out of the mess we’re in and restored us to where He always wanted us to be. And He did it by means of Jesus Christ … Having faith in Him sets us in the clear” (Romans 3:23-25, The Message).

My husband is one of the good guys. He grew up hard-working, honest and caring. That, however, does not qualify him to wear the white hat.

It was as a young adult that he realized he was in need of direction for his life from the God of the universe. He just accepted the white hat Jesus Christ offered through His grace, mercy and love. It can be the same for anyone who feels they are caught in the clutches of life, of repeating the same difficulties day after day.

Jesus is the ultimate good guy. He can ride in with his white hat and make all things new.  It’s pretty much scriptural. At least this is my paraphrase of 2 Corinthians 5:17.

“Those who become Christians get to wear Jesus’ white hat signifying they are different. They are not the same cowboys any more; the black hat is gone. A new life, expressed in the white hat they wear, has begun!”

By the way, did I tell you? This week marks 36 years I’ve been married to the cowboy who now rides a gray Suzuki instead of a horse and sports a silver helmet instead of a white hat. Still, it’s what’s inside that counts.

What has wearing the white hat of Jesus done for you?