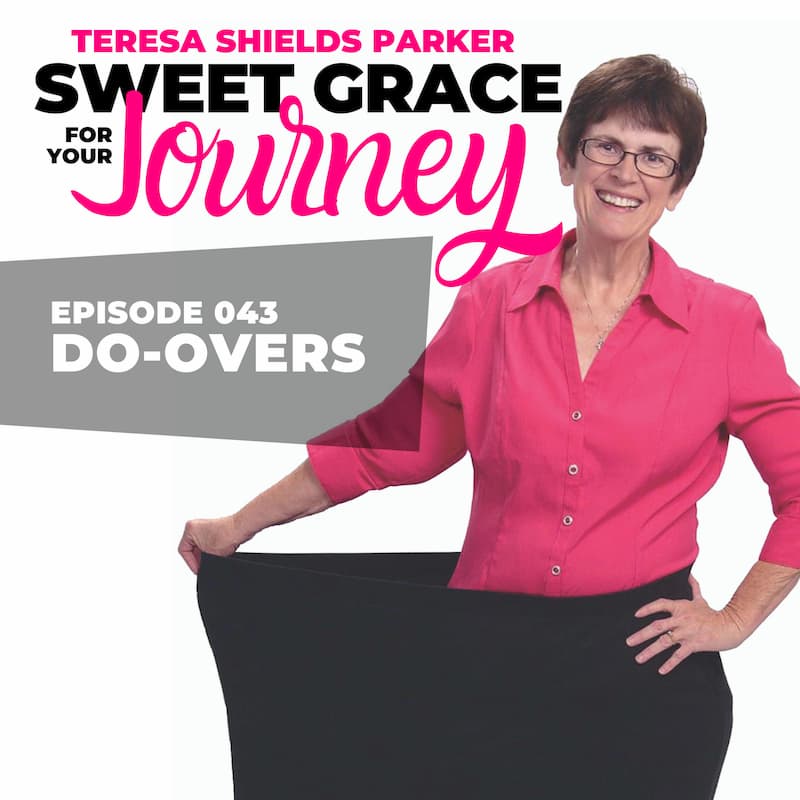 Out of our biggest mess comes our greatest message. I know this is true for me. For years I felt like a mess. I tried to fix it myself but every time I tried to diet, it would just result in me losing weight and gaining it back again plus more. Dieting made me fatter.

I made a big mess but I worked with God to help me clean it up. When I finally got through that God started revealing the message He had for me to share. It came out of my experiences.

God will use our experiences as trophies of His grace. Ephesians 2:7 TPT says,
“Throughout the coming ages we will be the visible display of the infinite, limitless riches of His grace and kindness which was showered upon us in Jesus Christ.”

That’s where we are headed. He wants to show people that if we can do it with God’s help, anyone can.

When I came to the lowest part of my journey, I prayed for a restart button. Can I just have a do-over God? Can we just start over? I promise this time I’ll listen. This time I’ll let you lead because I’ve made a big mess trying this on my own.

I was actually encouraged by a message I heard several years ago where a preacher said 15 books of Bible written by murderers. I found there were possibly 20 books that were written by the three men he was referring to. Moses, David and Paul.

Acts 7:30-36 Paul recounts the story of Moses’ do-over when God spoke to Him in the burning bush and called Him to deliver the Children of Israel from the Egyptians.

David’s biggest mess was his affair with Bathsheba and then masterminding the death of her husband, Uriah. 2 Sam. 11:14-18 recounts that.

His do-over came when he repented of what he had done in Psalm 51:10-12. He had to realize his sin was against God.

Paul’s biggest mess was persecuting, arresting and killing Christians. Acts 7:57-8:1 tells the story of the stoning of Stephen. Paul was the mastermind behind his death. One translation even says Paul took “pleasure at Stephen’s death.”

His do-over came on his phenomenal Damascus Road experience recounted in Acts. 22:6-11.

Moses’ do-over came after a long time. He was 40 years when he killed the Egyptian. Then he spent 40 years in the wilderness learning what God had to teach him.

David’s do-over came during a time of abject poverty of soul, crying out to God for mercy and compassion. It was a time of total repentance.

Paul’s do-over was an instant moment of change. He couldn’t fight it. There was no denying that Jesus had appeared to him in order to change his life completely.

My biggest mess was gaining up to 430 pounds. My do-over took many years of working through my issues until I had an aha moment like Paul did, understood I was a sugar addict and began to turn around. After that I really felt like David. I was mourning what I had done and repenting.

Moses didn’t want to go back to Egypt. He was scared. David was on his face in repentance. Paul needed help from the very ones he had been persecuting to make sure the Romans didn’t kill him once they found out he had switched sides.

I felt a little like all of them on my journey. I needed help from mentors. I definitely spent a lot of time I my face in repentance for rebelling against God and not listening to what He wanted for my life. Mostly though, when God called me to do more than just lose weight and write a book, I was like Moses. I was scared.

Writing a book was OK, but then came having to speak and I didn’t want to do that. Tv and radio, workshops, video courses. I didn’t want to speak. So I’d prepare and have everything written out for a speech but I found I rarely look at my notes because in his graciousness, God has broken the stronghold I had that said I can write but I don’t have a voice for speaking.

God led me through this whole thing of speaking to the point that October 2019 I answered his call to begin this podcast. That was never on the list of things I wanted to do, but God in His wisdom knew.

Then after writing Sweet Grace, I led a Sweet Grace book study at my church. Towards the end three of the women stayed afterwards and told me they had been following what I had been teaching, but were concerned because the class would be ending soon. God used that session with them to call me into coaching. I was reluctant at first because I know all the excuses for not losing weight. I wallowed in them for way too many years. I wasn’t sure I wanted to go back through what I’d just come out of. But God assured me He would give me all I needed to coach. I opened my first coaching group on July 1, 2014.

Since then my coaching group, courses, books, podcasts and social media posts have reached thousands of people. It’s beyond amazing to me what God did when He gave me a do-over. I thought I was just losing weight to feel better, but God had so much more in store for me.

Even when I wrote my first book, I never imagined what He had in store. God can take our biggest mess and create our greatest message. Only He can do that. We can’t orchestrate it. I had no idea what God was up to when I finally surrendered my sugar addiction to Him and allowed Him to remove the strongholds which were keeping me stuck in super morbid obesity.

I really began this journey out of selfish reasons. I wanted to feel better and look better. However, God wanted me to live a better, more fulfilling life. I didn’t have a clue what that looked like, but He did.

I don’t know what God has waiting in your future, but I do know what He wants for you right now. He wants you to be healthy—body, soul and spirit. If you need help with that, I’d love to have you join Overcomers Academy. Doors are open now. Get in now and take advantage of all the resources we have before our new Breaking Strongholds course premiers in September.

Are you ready for a do-over?