Have you ever been stuck? When I weighed 430 pounds being stuck was a fear I had. I didn’t sit in booths because I was afraid I would get stuck there. I didn’t go in caves because what if I got into the depths of it and I couldn’t fit through an opening? Then I’d have to go back to the beginning or wait there all by myself.

I remember one time when I was a teenager. We went on vacation to Lookout Mountain in Tenn. They had one pass called Fat Man’s Squeeze. I didn’t even attempt to go through it. There was a way around it although it was up steep stairs and down more steep stairs. 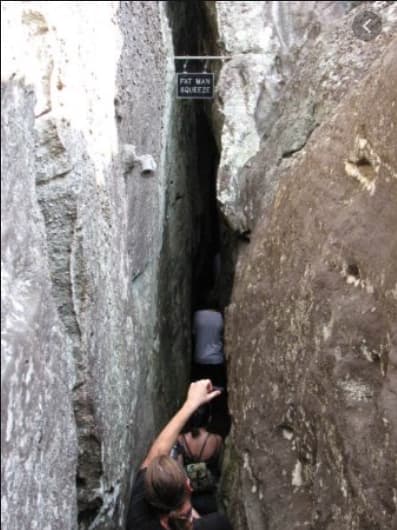 Fat Man’s Squeeze at Lookout Mountain, Tenn., was one place I didn’t want to get stuck. (Photo from Trip Advisor.)

My mother and I both chose the alternative. I was so afraid I would get stuck and could never get out. That fear of getting stuck in narrow places stayed with me especially when I became the size of three people instead of one.

There is something worse than being physically stuck, though, as uncomfortable as that is. It’s being mentally, emotionally and spiritually stuck when we just think all that’s wrong is we are physically stuck.

Where are you stuck? It’s a question that begs an answer. Like any seasoned coach, teacher or mentor, the one asking that question will just wait and let it sink in. A good question is one you can’t answer right away. It’s one that makes you think.

The weird thing about the question of where are you stuck is it comes when we are complaining about something that has happened to us or something someone has done to us or life in general. We don’t’ feel like we are stuck. We feel like it’s other things and other people who aren’t going forward and that means we can’t move either. It’s not our fault. It’s everything and everyone else.

Or maybe we know we are stuck because we can’t stop thinking about things in our past that have gone wrong. So we rehearse those scenarios over and over again. Thinking if we had done this or that, then the situation we are in would be different. The truth is, we can’t change the past. We can only change how we deal with the present.

Perhaps we feel stuck because of something done to us and we are trying to change it. In certain situations this is necessary. If it is a law or rule imposed on us from an authority we are under (whether an authority we are willingly or unwillingly under) we can appeal the decision and ask for it to be changed. Or we can step out from under that authority, like in a job or other similar situation.

The problem with that is, what do we do in the meantime? We could go around that rule, but figuring that out feels impossible when we’ve been slapped in the face with regulations. We feel stuck without a way to move forward. This is not a physical kind of stuck. This messes with our mind, our will, our emotions andd our spirit. We are stuck and stuck is not a comfortable place to reside. Yet many of us live there.

As a Christian weight loss coach, I encounter many beautiful women who feel stuck. They say, “I just can’t figure out how to lose weight” or “I’ve lost weight before but I gained it all back plus more and I am afraid if I try that again I’ll just do the same thing again. So why try?” They feel stuck because of what has happened in their past.

When we really get down to the core of the issue, many times it is because they were trying hard to lose weight and then something happened that threw them for a loop. Things like the illness, disablement or death of a loved one. A divorce. A huge financial issue. A problem with a child or spouse that they can’t fix but still somehow feel responsible for. A personal health issue. A job loss. Estrangement from a friend or family member.

All of these are problems they can’t fix and so they revert back to what they’ve always relied on to help them through any circumstance—food and lots of it. However, this feeling of being overstuffed brings with it many other issues like weight gain, disease and total frustration at their situation. When they eventually recognize they are stuck, they think it is because the diets they’ve tried don’t work. They know they are stuck, but blaming their feelings on their physical issue, won’t solve the problem.

Still, this is the point where many people come into a weight loss program or coaching group. We think if we can just get on the right diet, our problems will magically change. However, what we eat is just the tip of the iceberg. The reasons as to why twe eat when we don’t want to are hidden beneath the surface. Remember, 90% of an iceberg is below the surface of the water where it can’t be seen.

When we go on a diet and lose weight, all we are doing is dealing with the tip of the iceberg—the part we see. That’s only 10% of the problem. The majority of our issues are below the surface. Even when we drill down to when we started gaining weight or regaining weight we have lost, that still may not get to our core issue. For instance, let’s say a woman retraces her history and finds that she lost weight and then began gaining it back when she had a huge financial blow. Immediately she realizes that situation is one that is causing her to overeat.

However, that situation is likely not the root of the issue. Many times we stop there and don’t go any farther. The real issue is much deeper. Why did this financial issue cause her to go off the rails with her eating? It likely has to do with how she was raised to view money and finances. If she feels like she is nothing without her money, then her identity is sunk and she will go back to her old ways to manage her feelings.

Problems We Don’t Want to Face

Her feelings, though, are about money, not food. She must deal with the root of why she feels like she is nothing without her money. This can be a major identity crisis that she doesn’t want to even think about. So she eats to try to make her feelings go away.  This works for a while but then we need more to get the same good feelings and so on.

Overeating is a way many of us deal with the problems we don’t want to face. Binging, purging, overeating, food addictions are all connected to this. We start with wanting to lose weight but that is not the real problem. The real problem is who am I?

Her problem likely started in childhood with how she was raised. It doesn’t matter if it was a wealthy, middle class or poor family, if the emphasis was placed on finances, she will believe she has to have money to be someone. Whatever the mindset is, it affects how she sees herself. Instead of seeing herself as a loving, caring mother or grandmother, she sees herself as nothing when her family simply wants her, not money.

That 90% of the iceberg comprises her thoughts, feelings, emotions and spiritual awareness. She has built her life on a core principle that is sinking sand. It is an unstable foundational principle she doesn’t even realize she has constructed her life on.

As she gets older and sees she doesn’t have what she thinks she needs to be somebody, she goes to things she thinks will protect her emotionally. Like many Christians, she goes to food because it seems like a sanctified addiction. No one is prohibiting her from eating, but when she overeats, she adds pounds and other health issues begin rising up It is an endless cycle. The only way to make it stop is to get to the root of the problem.

She has constructed her life on a lie. It is likely a half-truth. The devil loves to deal in half-truths. While it is true that she needs money to survive, she also has to realize that she cannot make money her god or her standard by which she determines her self-worth.

There is a way through this, but it takes work to rebuild the foundations we have. We must focus on the areas where we have allowed cracks to form. Without a firm foundation, we feel stuck and unable to move forward.

Where are you stuck? Wherever that is, God is ready to help you move forward.

We work on this and so much more in Overcomers Academy. Doors are open now. Go to https://teresashieldsparker.com/overcomers/ for more information or to join. I’ll see you in the group.

Also don’t miss episode 66 of Sweet Grace for Your Journey podcast, Where Are You Stuck? Find it HERE.