The Scariest Part of Halloween

I grew up in a preacher’s home, but we celebrated Halloween with gusto. As I got older I wondered why we did that when I had devout Christian parents. As an adult I saw it as the devil’s holiday because it was a time when we encouraged children to dress up as ghosts, goblins, witches, devils, vampires and anything evil. That was scary, but there was still something even more scary about Halloween. 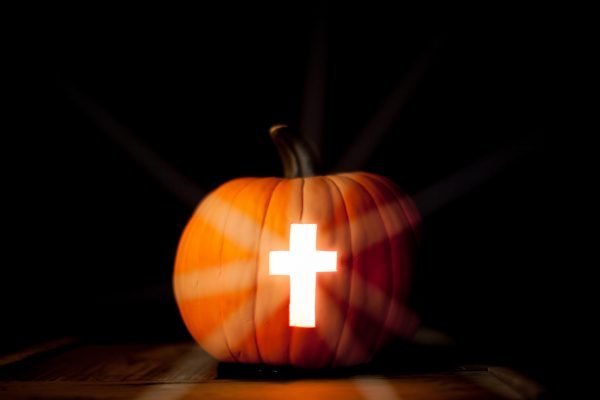 When my son was around two, he was extremely scared of gorillas, gorilla masks or anything big, loud and hairy. There was an ad on television with a man dressed up as a gorilla and anytime it came on he cried, ran and hid.

That year at Halloween an adult family member came up to the front door with a full gorilla facemask over his head. My son was in the living and saw the gorilla just as it growled. I was afraid he was traumatized for life.

I think that was the first time I thought, “Why do we have a holiday that scares our kids to death?” It didn’t make sense. I was also concerned about the increasing number of entirely wicked costumes that seemed to be everywhere on every size kid from tiny to large.

Even though I weighed over 300 pounds at the time and loved anything sweet, I was also concerned about the amount of candy a child could collect and consume in the course of one evening and what that might do to him or her. Then, there was the entire debate about whether or not it was even right for Christians to celebrate Halloween.

Some say Halloween began as a celebration of All Saints Day and All Hallows Eve combined. It’s said to be the time the church remembered the saints, those martyred for the faith and those who have departed this earth, according to History.com and Wikipedia.

It was a time for lighting candles and placing them on the graves of the dead, abstaining from meat and eating vegetarian foods like apples and soul cakes.

Soul cakes are a small cake filled with cinnamon, allspice, along with raisins or currants. The baker would make the mark of a cross on the top of the cake. These were baked on Oct. 31, All Hallows Eve, as an offering to the dead. The next day, All Saints Day, children would go from door to door begging for the cakes, a kind-of precursor to collecting candy like is done today.

Others say the origins are in a Celtic festival commemorating the end of summer and harvest and the start of winter. It was said to be the time when the boundaries of the worlds of the living and the dead became blurred, according to History.com.

During this festival, people would light bonfires to ward off ghosts. They also made sacrifices to the Celtic gods to protect them through the winter, wore costumes and attempted to tell each other’s fortunes.

The Scariest Part of Halloween

The origins of Halloween may have been Christian at one time, but to me, the overemphasis on evil costumes, scary stories and such has taken it out of the realm of being a Christian holiday. Churches, though, that hold parties that allow fun costumes, games and family atmosphere are great alternatives.

But even they still have the scariest part of Halloween. They still give away candy, concentrated sugar, the more the merrier.

Remember the early Christians baked soul cakes, which children went around begging for? The soul cake was sweet, but it was not the like the candy we give children today. This emphasis on sugar is truly the scariest part of Halloween.

Did you know that over one-fourth of all candy in America is bought at Halloween? Therefore, one must logically assume it is given to the most vulnerable of us all—our children.

It really was quite uncommon when I was growing up in the 1950s and 60s to have an obese child or teen in my school. In 2017, the American Heart Association (AHA) says one in three American children and teens are overweight or obese. These statistics have more than tripled since 1971. Today, childhood obesity is the number one health concern of American parents. It has topped drug abuse and smoking.

Obesity can lead to many diseases that in previous years weren’t seen until adulthood. These can include heart disease, type 2 diabetes, high blood pressure and elevated blood cholesterol. Then, there are psychological effects like low self-esteem and negative body image.

When we find out one of our children has a disease that can take his or her life, it will take the sweetness out of any celebration.

What Can We Do?

The AHA has tips for helping overweight children. Many of them have to do with limiting sugar or eliminating the access to foods with concentrated sugar and increasing meats, vegetables and fruits.

The correlation between sugar addiction and Halloween is something I know all too well. I endured nights of running through the rain in a ghost costume with a plastic mask over my fogged up glasses, going up to doors with adults in vampire costumes playing scary music from loudspeakers just to be able to fill my bag full as much candy as possible.

It was the one time of the year we could eat all the candy we could gather. Perhaps my mother thought it would make us so sick, we’d never want candy again. I really wish that had worked. It would have saved me years of super morbid obesity.

Halloween Is Not To Blame, We Are

Children will eat what we make available to them. If there is a current supply of fresh fruit or nuts, cheese sticks, yogurt without sugar, they will choose those.

As neighbors and friends, we can help turn this around starting with Halloween. At our house, costumed children will receive cutie oranges, goldfish snack packs, Christian or positive stickers and other similar items. Every year I’ve done this, parents have looked me in the eyes and said, “Thank you for not giving candy.”

The truth is, we can make this holiday what we want it to be. It can be a fun time for children to celebrate in a positive way or we can contribute to a sweet tooth that in later years can lead to a full-blown addiction and possible early death.

What will you choose?