Keeper of the Light 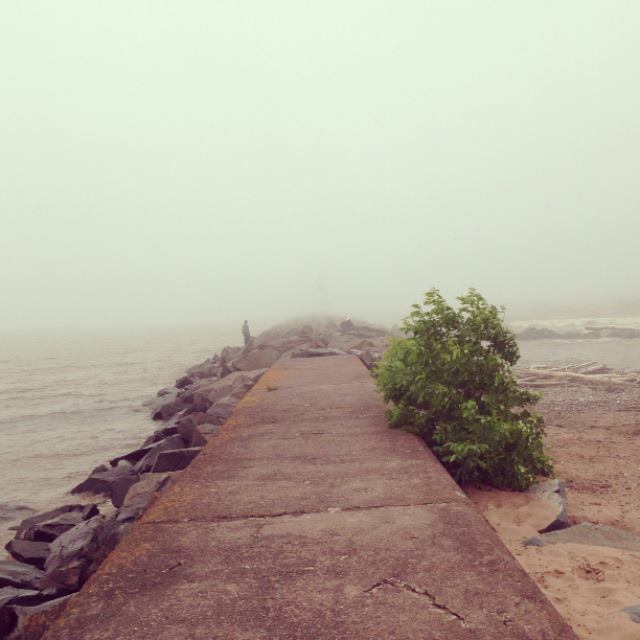 Ominous, continuous, the low tone sounds.
Warning, danger, possible, probable, imminent.
The white haze surrounds.
One step and another and another still
Gut-clenching, a bottomless pit.

Taste the clean crisp wind whipping grass around cold legs,
Sinking shoes in sandy depths and lengths and heights just beyond reach.
There is a light barely distinguishable,
Shrouded in mystery,
Cloaked, daring to be unveiled.

Treacherous rocks loom in the distance.
Waves break high, a giant spray to the face.
Fingers freeze together.
Trudging forward against the wind.
Jackets tightly wrapped.

Seekers trudge on towards a future
They cannot clearly see
Cloaked as a fathom in the fog
They hope it will become clear in another foot
or two or ten thousand.

Behind, the shore is dim.
Ahead, the destination is uncertain, insecure,
And yet the drive to know is strong,
forceful, overwhelming,
This rumbling urge.

Moving ever forward,
Carefully, yet securely,
Faith-driven towards a destiny,
Holding tight to the hand
Of the Keeper of the Light.

“Jesus said to the people, “I am the Light of the world. So if you follow me, you won’t be stumbling through the darkness, for living light will flood your path.” John 8:12 TLB

We were told there was a lighthouse at the end of this pier in a remote area of Wisconsin. Since I’m a lighthouse junkie we went on a search for it. If you look carefully you can barely make it out in the distance, clothed in the fog. It was doing its job, though, sounding the foghorn to warn whatever crazy captains of barges, boats or ships might be on the lake in this kind of weather.

The farther along the pier we walked the more you could see the shape of the lighthouse. But the rocks and water spraying in our faces, made the going rough. Not only that, but this was in 2013 before I had gotten over my fear of heights. The long pier, which was actually pretty high above the water, scared me just thinking of walking it. So I stayed back, while my husband ventured forward. That’s the intrepid journeyer you can see in this picture, even daring to climb on the rocks.

It wasn’t until 2014 after I go that I learned the truth of what I wrote here. When I am afraid of going forward the only thing that helps is to know beyond a shadow of a doubt that I am faith-driven toward the destiny God has planned for me and that I am holding tight to the only one who is the Light-bringer, Light-giver, Light-bearer.

I do not want to be stumbling through darkness or a foggy future. I want to be walking with the living Light guiding my every step.

As the old song says, “Many things about tomorrow I don’t seem to understand, but I know who holds the future and I know who holds my hand.” That’s all I need to know. Jesus, the Keeper of the Light, is holding my hand and guiding my steps.