Peggy Burgess, 69, is a single mom of five, grandmother of seven and great-grandmother of six, with another one on the way. She’s my guest on episode 11 of Sweet Grace for Your Journey podcast.

Left, Peggy Burgess and Teresa Parker in 2015. Right, Peggy and her granddaughter in 2018. Peggy has lost 79 pounds and is no longer in a wheelchair.

Since coming into my coaching courses and groups, she has lost 79 pounds. She’s doing it the right way, slow and steady and incorporating habit changes as she goes. That is resulting in her lasting weight loss.

She’s gone from constantly using a wheelchair, not driving and being housebound to walking, volunteering, driving wherever she wants and even babysitting her great-grandchildren and other children.

The first time I met Peggy she was in a wheelchair and was no longer able to drive. I was helping with a writer’s conference in Harrisburg, PA. She lives close by so her daughter graciously brought her to my hotel so we could meet.

One thing I dislike about an online coaching group is not being able to meet my members in person. So whenever I travel I love getting together with current and past members of my coaching groups or courses.

Visiting with Peggy was a delight. I felt from the moment we met that we had a divine connection. I realized that but for the grace of God it could have been me in that wheelchair and not being able to drive.

Loss of mobility means loss of independence. I’m not sure how I continued to be able to walk and drive when I weighed 430 pounds, but I did. Once I was asked by a Christian television show hostess who enabled me when I was super morbidly obese? She said, “I see these people on tv who are so large they can’t get out of their homes. Who enabled you when you were that large?”

My answer was that first of all I was not bedfast. I was mobile. I was able to walk. I was able to drive. No one enabled me. I enabled myself. Those of us who have issues with food will find a way to get what we want. We are stubborn that way.

I’m so glad I met Peggy back then and took a picture of us together. She has been in my coaching groups for over four years now and her before and after story is amazing. She’s had many major health issues, not the least of which was not being able to walk more than a few steps for three years. She had kidney cancer, an operation on her esophagus, blood clots, hip replacement and depression.

“I also I had little or no spiritual companionship,” she said. “I was looking for a church after my wonderful small group disbanded when the pastor went back to school. Not to mention I had relationship issues with my children and grandchildren. I knew God, but I was at a point where instead of walking closely with Him I was far out in the crowd.

“My prayers at that time were of desperation. They were simply, ‘Help!’ I knew that He alone could fix things.”

She was reading Charisma magazine and saw an ad for my then new book, Sweet Grace: How I Lost 250 Pounds and Stopped Trying to Earn God’s Favor.

This is astounding to me because even though Charisma has been running my articles since 2013, I’ve never paid for an advertisement. Yet, Peggy remembers a boxed ad with a picture of Sweet Grace. I don’t doubt it. God has promoted Sweet Grace. Not me.

In whatever way she saw it, she says, “I knew God had sent me this information. I read the book, joined Teresa’s group, and began a journey not only to get healthy, but to draw closer to the Lord. I finally realized that nothing would happen unless I took some steps.”

I remember working with Peggy back in 2015 when she first came into my group. She had a lot of weight to lose, but I encouraged her to take it slow and make sure each step of her journey was on solid ground. Slow and steady does win the race, especially the race we are in.

“Forgetting the past and looking forward to what lies ahead, I press on to reach the end of the race and receive the heavenly prize for which God, through Christ Jesus, is calling us,” (Phil. 3:13-14 NLT).

She started with what had become a bad habit and a trigger food. She started by giving up the candy she had sitting in a bowl on her desk.

I also told her that stopping a bad habit will only work if we focus on a good habit we want to start. She choose to start reading her Bible every day. It was something she wanted to do, but had been putting off.

That began to feed her in a way she had been longing for. She didn’t try to change anything else until she got that one bad habit under control and had the one good habit started.

“Each success has encouraged me,” she said. “I am the only one responsible to God for what I do. My journey is not the same as anyone else’s. I wish I could say I was immediately obedient in every area. But here is a summary of what has happened in the past four years.” 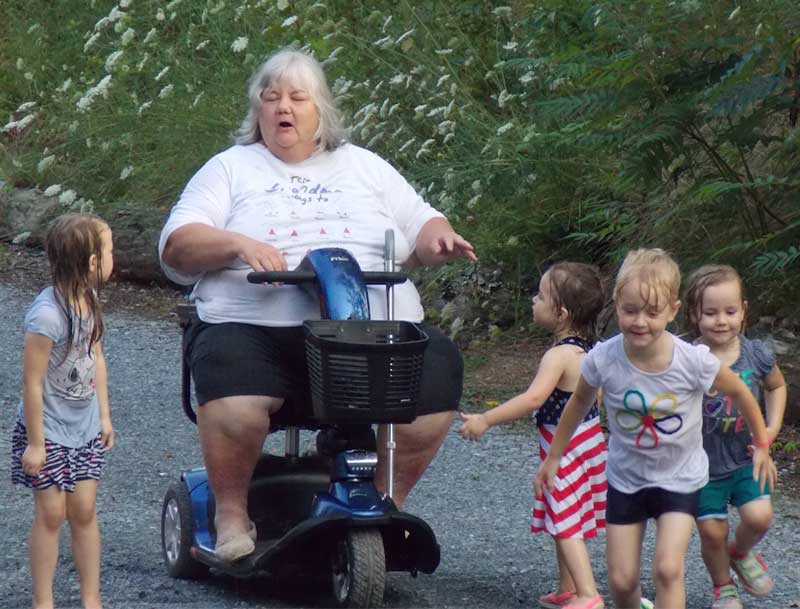 Peggy Burgess playing with her great grandchildren when she was scooter bound.

“Back then I was wheelchair-bound, mostly house-bound, could not drive and weighed 388,” she continued. “I had no energy and felt hopeless.

“Now I walk only with a cane. I drive wherever I need to. I volunteer at our Ronald McDonald House. This summer I have had the stamina to babysit four of my great grandkids a day or two a week. Another great blessing is that a wonderful Bible-believing church found me!“

Peggy is 69 years old and has lost 79 pounds in four years. She has never given up even though she has more weight to lose.

“I know as I am obedient to the Lord my weight will continue to go down,” she says. “In the past I would have given up and gone over 400. That will not happen as long as I am on God’s path. He is faithful.”

There are three things I love most about Peggy. They are her consistency, her focus on her destiny and her desire to please God in everything she does.

“I am enjoying life again,” she says. “I want a future and the best part is my relationship with God is getting better and better. Sometimes when I start to get in a funk my prayer is ‘God, You see me and how I am. Make me want to do the right things.’”

When she’s in those down times, she reminds herself, even as she is reminding us, “God loves you. He has wonderful plans for your life. Be encouraged.”

My desire for every person who has issues with food and weight and the overwhelming frustration that comes with that is to fall into the arms of God and taste and see that He really is good. He really is all we need. He really does want to set us free to follow Him completely.

Speaking of freedom and of being stubborn. There is one good thing about being stubborn. It’s found in Galatians 5:1 TPT. “Let me be clear, the Anointed One has set us free—not partially, but completely and wonderfully free! We must always cherish this truth and stubbornly refuse to go back into the bondage of our past.”

You are set free in order to stay free. Let us help you get there.

You can join Peggy and the other members of Overcomers Christian Weight Loss Academy when doors open Jan. 30. Get on the waitlist to be notified when doors open and receive free resources while you wait. Go here: https://TeresaShieldsParker.com/overcomers-christian-weight-loss-academy/.

As Peggy shares on the podcast episode, Overcomers Academy is not a diet program. It’s not so much about food. It is about what has us so stuck we can’t go forward. Of course, we will talk about food because food is the issue we can see, but as Peggy explains this program is more about our relationship with God than anything else.

Join us in Overcomers Academy. Find the podcast episode here.