Raising Butterflies: It Begins With Caterpillars

First one, then two…and three…and another…and another…. My daughters experienced the tug of war between staying to see more and running to the door to share their excitement until finally I heard the enthusiastic cries of their discovery. 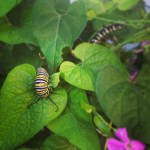 My kids are total nature nerds, and I absolutely love that about them because—well, let’s just say, it runs in the family. Their shrieks of joy were over caterpillars. Yep. Caterpillars. But not just any old caterpillars! These were monarch caterpillars, and they were exquisite! And as cool as these creepy crawlers were to us, we were filled with anticipation for what we knew lie ahead. We had been given a front row seat to one of God’s most amazing illustrations of transformation.

This seems like a good place to reflect a truth in that moment. We rejoiced in the caterpillar because we knew what was to come! It is a law of nature. There was no doubt that this creature would become a beautiful butterfly. It’s a documented fact—not a wish on a star. What if we could trust as much in our true identity as children of God?

So, day after day, we would check on our little “butterflies in disguise.” We tried to keep track of them as they scattered throughout the milkweed devouring leaf after leaf.  They were given names (which had to be pretty interchangeable since they all looked mostly identical!). The reports came in regularly: number of caterpillars viewed, growth stats and location changes. It was like a daily weather report. And there was little variation in its delivery until one day my youngest slinked through the door with a heavy heart. “Noodle is dead,” she said. “Oh?” I wondered. “What happened?” “I don’t know,” she shrugged. “Come and see.” 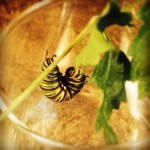 What I saw was a caterpillar curled into a circle, which is often a postmortem position for similar creatures. But as I looked closer, I noticed something—something amazing. There was a tiny, white, sticky, web-like dot on the plant where the bug had curled. And then I saw that he was moving ever so slightly. And because we are nerds, we simultaneously realized that our Noodle was not dead. He was attaching himself to the bottom of that leaf so that the next phase of metamorphosis could begin.

But he doesn’t really know what’s coming, does he? He couldn’t possibly. I mean, even if his butterfly mom and dad were there to sit down with him and have “the talk,” logic would argue that he must be adopted or they must be crazy, right? So what is he thinking? And what makes him “assume the position” in the first place? If you ask me, it seems like a suicide plan. He is literally about to hang himself. His caterpillar life is done. He knows it. Game over.

The next day, we saw him there in the familiar j-hanging position. At that point, the caterpillar required nothing more than time and stillness. This was our opportunity to carefully move him into our home for protection and document the amazing changes that were to come.

For those of you who haven’t witnessed this personally, let’s get a little biology lesson (from a layperson who will likely not get it all right). I have often used “chrysalis” and “cocoon” interchangeably and therefore incorrectly. A cocoon is created by the insect to protect itself while in the pupa stage. Moths spend their pupa stage in a cocoon. But caterpillars who are destined to be butterflies…they just hang. They essentially make their own noose and hang.

Before long, the caterpillar’s skin pops open like a zipper that gave up after Thanksgiving dinner. My kids and I have developed sound effects to emulate this splitting moment, but I’m afraid it would be lost in translation.

Now, in what seems like the insect’s last fight against mortality, there is intense writhing and wriggling as the inner pupae removes the trappings of its former life. You would expect to see a naked caterpillar at this point, but that’s not the case. There are no signs of a caterpillar beyond the scrunched up skin that lies beneath. The chrysalis is already completely amazing. It’s bright green with golden accents. And with no outside interference whatsoever, it contains every ingredient for a monarch butterfly.

Needless to say, the countdown was on. My girls knew that in 10-14 days, we would see an actual butterfly emerge from this tiny green jewel. And during that wait, we kept watch on the others as they, too, would reach this next step toward maturity. We were filled with anticipation. 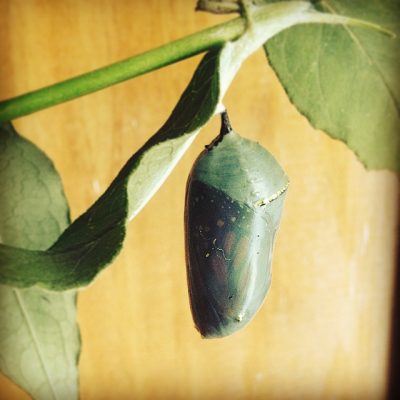 Although from our perspective, not much had changed over a week, you can be sure that things were going on inside that chrysalis. We couldn’t truly grasp what was taking place until the day we noticed a slight change in color. Our bright green beauty had become darker. The change drew us in for a closer inspection. To our delight, a window was opening to the inside of that chrysalis. The protective casing was becoming transparent. Imagine that. We were invited to see the miraculous as if to reaffirm our faith in the promise of change. And true enough, we were relieved to see with our own eyes what was taking place.

Wow! What a picture of the reassurance and the blessing of transparency! Sure I believe that God is good. Sure I believe that He can make beauty of my ashes, but it doesn’t happen overnight. Often I just need a glimpse of what He is creating in me, and many times that comes by way of another’s faithfulness to reveal the work He is doing in them.

Day by day, the chrysalis became clearer, and we could see the new creation inside that tough shell. And it is a pretty tough shell. The butterfly inside looks much like a prisoner unable to escape. We pondered, “How much longer?” “It looks ready, right? Why isn’t it coming out yet?”

Lori Mosteller is a wife and mother of three. She lives in Columbia, MO. She enjoys photography and exploring nature with her family. Lori is a singer/songwriter with a passion for worship. Her original song, I Am (watch on youtube), was chosen as the theme song for LeadHer, and is available on iTunes for download here. She shares her talents with the local church as well and is currently finishing her first album. You can like her on Facebook to keep up with that project 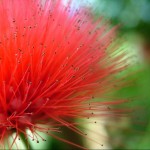