The brisk breeze necessitated lying closer together, at least that’s what he told himself.  It seemed the dark violet sky wanted to swallow them surrounding each completely.

In contrast, the three moons of Trikala glowed various neon colors first light purple moving to blues, greens and yellows and back again. Stars always seemed near enough to touch as throughout the night they fell headlong through space. 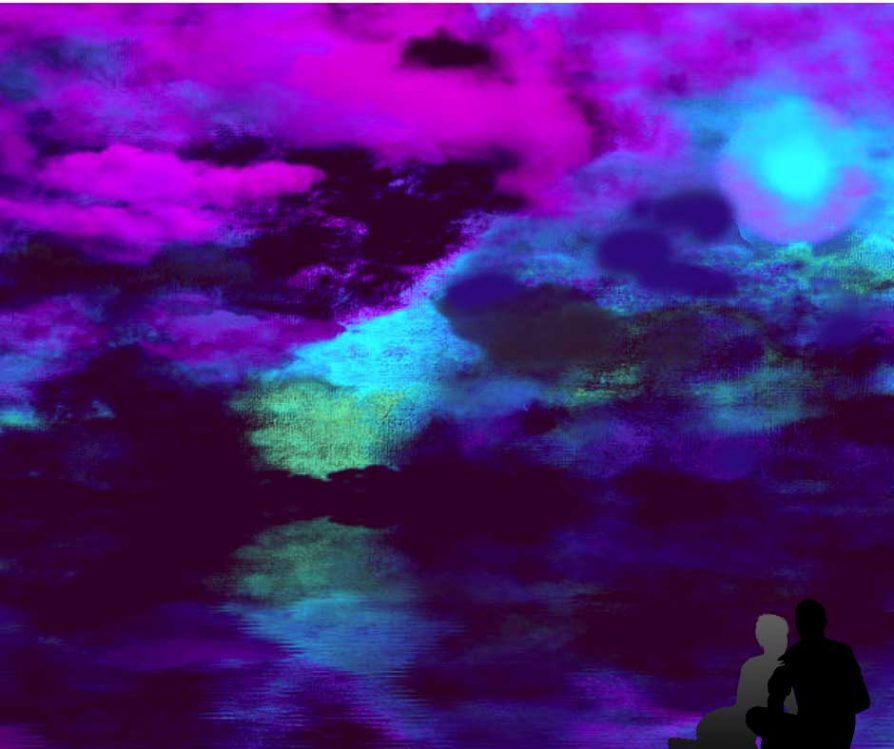 “Look, another shooting star,” X said pointing in the western sky. If there were anything sinister about the night the two laying on the soft blue clovers of Trikala did not notice.

“Moon One seems to be winking at us tonight,” Y said. She couldn’t suppress the giggles rising in her throat. She snuggled closer feeling his chest rise and fall beneath his robe. She played with the gold rope that held it in place at his waist.  Taking her hand, he moved it back to his chest covering it with his.

“He’s winking because he’s never seen a more beautiful Trikalan young lady.”  With that he turned her perfectly formed face to his and kissed her softly, then more urgently until both were breathless with anticipation. Then without a word, he stopped and stood.

She stared at his outreached hand.  “What are you doing?” The question went unanswered as she took his hand and stood.  Then in one quick leap, she jumped and wrapped her arms around his neck covering him with kisses, wrapping her legs around him. She could feel his entire body pulsating. Gently removing her arms from his neck, he let her feet fall to the ground.

Eyes still locked with his, she took one step back. Then without speaking, she loosened the string that held her silver robe in place.  It fell to the ground revealing everything Y had only dreamed about. He gasped audibly.

Trikalan law demanded that men and women reveal their true ages.  D’s were the ones who were more vulnerable at not making rational decisions. The beginning of irrationality was said to be 17D.  Already they had pushed time beyond its legal limits.  He blew his breath out with an exasperation snort.

“What?” she said.  She probed his face for a hint of his feelings. What she found there was a longing she well knew.  She smiled and cocked her head to one side.

He let his eyes touch her warm alabaster skin.  He memorized how her toes curled under her feet for warmth, where her ankles blended into the calves of her legs.  How her knees turned in slightly and curved out to her thighs and hips.

He noted how perfectly these curved into her tiny waist and then physically inhaled as he allowed his eyes to move upward to her breasts allowing himself to stay there only a second while he moved upward to her smooth neck and then her tiny chin, full lips, sloping nose and large dark eyes.  Her coal black hair was cut short and stood spiked with silver tips.  Her ears, dainty and small were decked with several rows of silver stars.

He picked up the robe and draped it around her shoulders. Then he pulled her to him and held her tightly as if she would run away. There was more, so much more he wanted, but he knew it was not to be—not tonight or any other night until many, many years in the future, if ever.

And he cried, not small quiet tears but loud, wailing sobs.  And she cried, softly, but with great gulps of grief.  Her time of understanding had not fully drawn to a close, but soon would in its completeness and she would be free to not remember.  In a way, he envied that about her.

They were on opposite paths of a world stuck in an unbreakable cycle.  She was going one way while he was going another and physically there was no stopping. His, a sentence to many more years of remembering. Hers, a release to the process of rediscovery.

“If you remember,” she said looking deeply into his eyes

“Oh, it is not me who will forget. I will never forget you.”

“You cannot help but forget. It’s those who grow up who have only remembering.  And you, my silver princess, are worth remembering.”

“As are you.” Her tears fell soundlessly to the Trikalan soil.

“And how is it that someone as beautiful as you never took a mate?”

“I did take a mate.  However, not all Trikalan men are as kind … or sacred as you.”

“Where is he now?” he said ignoring her comment about his character.

“On the far side, I hope. That, at least, is where I remember leaving him many years ago.”

“What was he called?”

“In case I should ever meet him.”

“I would make sure he never hurts you or any other Trikalan woman ever again,” he said tipping her chin up to his face

“And he is malevolent.”

“There is nothing to cure that problem. There is only forgetting, but I shall not forget you.”

“How do you know that? How will you recognize me? You know I will not look as I do now.”

“I will recognize your love.” Grasping his hand she placed it over her heart.  “Feel that? The universe will remind me of why I exist. It is only to meet you again. Please tell me you will stay safe, if not for you, for me.”

For a long moment, his eyes held hers. He gave a nod of his head towards her. He stared into her eyes one last time memorizing every line of her face . Then turning he ran into the Trikalan night.

He heard her cries as she collapsed to the ground unable to move. Grief consumed her. He was thankful she soon would forget him. He, though, had only memories of her to consume every moment left for him to live.

He dared not turn around lest he violate all he knew was sacred to him, to her, to Trikala, to the crazy time warp in which they lived.

Still, whatever it took, he would make sure.

A NOTE FROM TERESA: I wrote this short story in 2011. I doubt I ever shared it since I don’t even think I had a blog back then. I updated it and decided to share it for Thanksgiving. It’s not a Thanksgiving story exactly, but it reminds me that I am so thankful for the love of a good man who always protects me, provides for me, comforts me, is a companion to me, is in many ways my teacher, my best friend who I can tell anything and everything to and the one who believes in me when I get to the place where I feel no one else does. “Sacred Love” is story that will speak to you in your language. What does it say to you?