Curls spilled over her face in various shades of purple. A tiny drawstring was the only thing that held baggy khaki shorts on her body. The loose, white top with open back helped to declare the colorful words tattooed on every available inch of her body that could be seen. Likely there was more that couldn’t be seen. I tried to shrug off thinking any more about that likelihood. 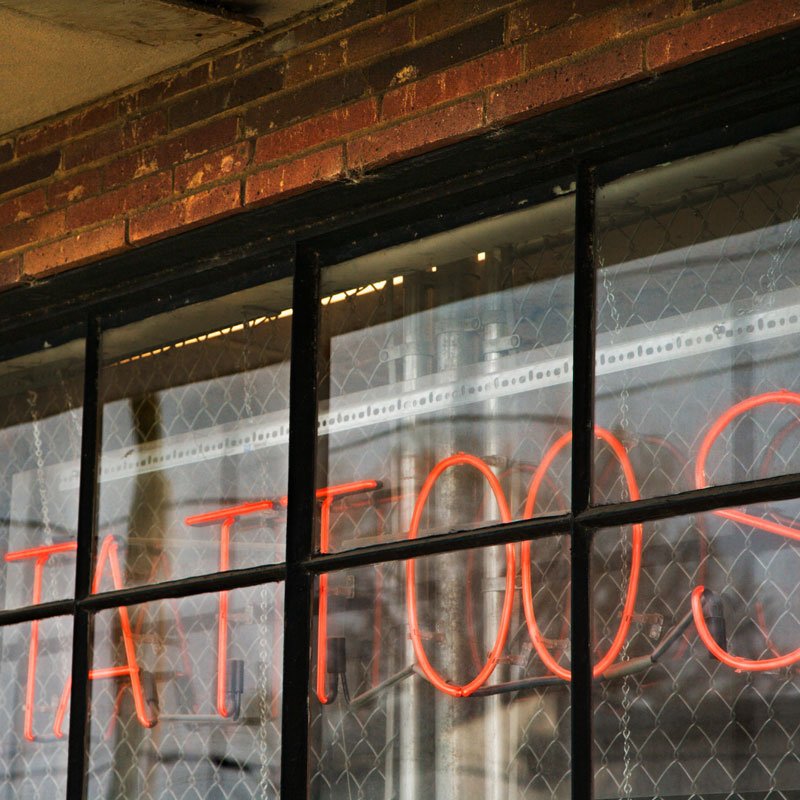 To say she stood out in the crowded pool area was an understatement. Still I was drawn to her, like a fly to honey. I wanted to read her. Literally I wanted to read what words were so important that she had given her body over to them.

It was crazy really. Here I am, a 56-year-man and I want to walk up to a nice-looking, 30-something young lady, who was a total stranger, and say, “Excuse me. What words are so important that you would submit every inch of your body to pain in order to display them?” But I didn’t want her to think I was a pervert or something.

She kicked off her flip flops and waded into the kiddie pool area, two toddlers squealing with glee beside her. Tugging on her leg the older of the two, a little boy, looked up at her pointing to the slide. She nodded, “Yes,” and moved into catcher position at the bottom.

If I walked closer to the side of the pool nearest to where she was, I might be able to satisfy my curiosity and not have to actually talk to her. From where I was all I could tell was there were words written on her skin, all in different colors. Some appeared to be sentences. Some were larger. Some smaller.

My mind thought through what words might be important to a young mother with small children. Could it be that she had gotten the tattoos when she was much younger and was just embracing her wrong choices? Was she a feminist, a racist, an extremist, a liberal, a conservative or worst yet, a terrorist?

Even though I was supposed to be swimming laps, it became my all-consuming desire to know her and the words she was displaying for the entire world to see. After all, I might have to make a phone call to the police if the words were dangerous, negative and inciteful. In my mind, I was already calculating how long it would take me to get out of the pool, go to my locker, find my phone and make the call.

Just then she sat down on the side of the kiddie pool with her back towards me and I saw the first word. In red letters at the top of her back just below her neck for all the world to see, her body shouted “JESUS!”

Every tattoo I saw declared a similar message in a different color and different font. “I am blessed. God has plans for my good not my disaster. Whosoever will may come to Him. Grace. Love. Joy. Peace. Patience. Faith. Goodness. Gentleness. Mercy. Forgiveness. Self-Control. If God is for us who can be against us? Pray without ceasing. I can do all things through Christ who gives me strength.”

I was more than intrigued now. I made my way around to her side, sat down and introduced myself.

“From across the pool before I could read what your tattoos said, I was drawn to you. I can’t explain it really. It’s crazy because I’m not a tattoo person at all,” I confessed.

She looked at me and smiled. “Can I share a story with you?”

“When I was a teenager I was super rebellious. My folks made me go to church and had strict rules. Tattoos were obviously taboo. So I saved up enough money and when I was 16, I got my first tattoo. Just to show my folks, I got the word “JESUS!” tattooed on my back.”

“Exactly!” she said. “My folks, though, never blinked an eye. My mother said, ‘I’m glad to see that you are proclaiming His name.’ I was shocked at her response. That night was a revival meeting at church and she wanted me to come. I was reluctant as always, but this time I was sure I’d get lambasted by others for what I’d done. I was embarrassed and ashamed.”

She looked off into the distance and I noticed a tear forming in the corner of her eye. “That night, though, was the night God got hold of me in a real way. I felt bad about what I had done. That was the night I decided rebellion was getting me nowhere. I surrendered completely to Jesus.”

“That’s a great story,” I said. “But why did you get all the other tattoos?”

“It’s simple,” she continued as a blonde-haired little girl climbed into her lap. “I decided if I could be bold in trying to denounce Jesus, I could be even bolder in proclaiming His message to the world. Plus by adding to what I had once had emblazoned on my body as a curse word, I changed the meaning of the message entirely.”

I shook my head, “Yes,” and watched as she hurried off to play with her children.

Why had I been so drawn to her, I wondered as I finished my laps? Never in a thousand years would I be able to use my body like a walking billboard even if it was for Jesus. Sure I’d been called, but not called to embarrass myself like that or make my body look like a walking clown.

Yet, deep inside my soul I knew this young mom was walking in an area of boldness I didn’t have and that cut me to the core.

“God, really what more do you want from me?” I prayed. “What does she have that I don’t have? Why do I see her as more effective for You in one trip to the pool than I’ve been in 30 years of ministry?”

There was silence from God. I hate it when that happens. I know it usually means He’s waiting to tell me something important, something I’ll actually hear and think about rather than dismiss.

I stopped halfway and walked to the end of the lane contemplating God’s answer to me. All I’ve ever known is using my voice, my gifting. I do that from the pulpit and counseling with members and directing staff. It’s what I do. It’s how I’m built.

I’m not sure I know how to do anything else.

I climbed slowly out of the pool. The curly-haired young mother had just been approached by another curious onlooker. Her message was clear.

I was well aware mine wasn’t.