When a Rebel Waves the White Flag

I had college degrees and a lot of head knowledge about the Bible, but that still didn’t stop me from believing some really big lies about God. I could see the lies others were believing just by looking at their behaviors. 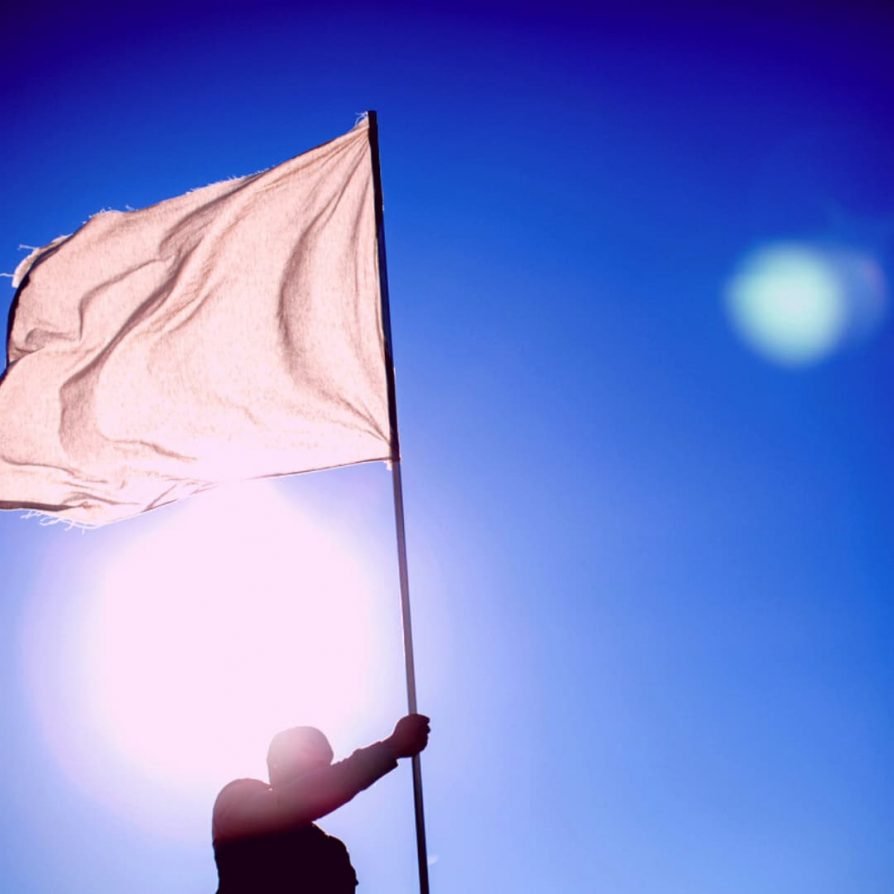 The lies I believed were in my blindspot. I couldn’t see them and didn’t relate them to my behaviors, even the obvious one of gaining up to 430 pounds.

It took me doing some work to even begin to acknowledge they were there. Recognizing the lies I was believing was the hard part for sure. Finding and admitting truth became the best thing I’ve ever done for myself.

One big lie I believed was I have to do everything myself. In essence, I saw any sign of surrender as a weakness. I felt God put me here on this earth to overcome and so overcome I must, but I have to do it by myself.

I can never overcome my human faults without submitting myself entirely to God, but I saw surrender as giving into an enemy or opponent. Waving the white flag was the last thing I wanted to do.

God, though, is not our enemy. So why are we in a war with Him in the first place? Our fight should be against the forces of evil. When we are insisting on our own way, when we are going against God’s best for our lives, we are in a war with Him, even if we are Christians.

We have rebelled against God, our God, when we decide not to follow what He says and instead get our own way. The process of resisting authority, control or convention is the very definition of rebellion.

Yet, when our authority is the God who loves us and only wants the best for us, fighting against Him is to fight against what is best for us. The only solution is to submit to the One who knows what’s best for us

Rebellion creeps in softly, slowly, in small increments. It usually doesn’t hit us all at once. We don’t call ourselves rebels because we just figure it’s our nature to eat too much, drink too much alcohol, take too many prescription drugs, spend too much money, buy bigger houses and cars and crave more and more and more of everything.

I would have never called myself a rebel back when I weighed 430 pounds and was editing Christian publications and still eating whatever I wanted, whenever I wanted. Now I see clearly that in that one area, I was a flagrant rebel who would not be caught dead waving the white flag.

I was a flagrant rebel who would not be caught dead waving the white flag.

The Sin of Rebellion

Romans 8:7 TPT tells us that “the mind-set focused on the flesh fights God’s plan and refuses to submit to His direction.” When we set our mind on the flesh, which is our selfish desires, we have made God our enemy.

God is really clear about what happens when we rebel. “Woe to the rebellious children, who carry out their own plans but not mine and who sign treaties without consulting my Spirit. piling one sin upon another,” (Isaiah 30:1 TPT).

It’s not a stretch for me to see myself as the rebellious child Isaiah was talking about. I could have rewritten the verse this way. “Woe to Teresa, who eats whatever she wants, but not what I show her is good for her, who spends way too much money on diets because she thinks it will be easier than consulting Me and following the leading of My Spirit. Every day her rebellious acts continue to pile up.”

That was definitely me when I was super morbidly obese. I’m glad the internet wasn’t around then because I would still be paying off bills I would have incurred from buying every single weight loss pill, shake or magic fix that promised quick, easy weight loss that showed up in my news feed.

I went through the religious motions of going to church, even reading my Bible and praying and hearing from God in other areas. But when I didn’t follow what He had clearly shown me, I was still a rebel. Partial obedience does not compute in God’s Kingdom. It is the same as rebellion.

Partial obedience does not compute in God’s Kingdom. It is the same as rebellion.

Since then, I’ve learned there were reasons I did that. I’ve allowed God to lead me through a lot of inner healing and freedom coaching work, but there was one huge hurdle I had to get over. I had to stop trying to fix my problems by myself.

Surrender Is A Good Word

I had to willingly submit every part of me to everything that God is. I had to repent of my rebellion. Then turn around and go the other way.

I had to understand: “The Lord our God is merciful and pardons even those who have rebelled against Him,” (Daniel 9:9 TLB).

Making the decision to stop fighting God and totally surrender to Him was the best decision I’ve ever made. Many people have asked me, how long did it take you to lose 250 pounds? I usually tell them one second or however many years old I am at the time.

Lifestyle change is something we work on all our lives, but there is that one second when we let go and surrender completely to God. It’s a life-changing second. If that second had not occurred for me I’d still weigh 430 pounds.

There is that one second when we let go and surrender completely to God. It’s a life-changing second.

Walking Out the Journey

When I began to obey God, He brought order to my very chaotic and confused life. This brought me peace for the first time in many years. “God is not a God of disorder, but of peace” (1 Cor. 14:33 NIV).

I also saw how the enemy had only one thing in mind for me. He wanted “to steal, slaughter, and destroy” my life. But Jesus’ said, “I have come to give you everything in abundance, more than you expect—life in its fullness until you overflow!,” (John 10:10 TPT).

Walking hand-in-hand with Him is a daily journey. I am always mindful of the weakness I have, but I now know that my weakness, when surrendered entirely to God, can be used in powerful ways. “When I am weak in human strength, then I am strong, truly able, truly powerful, truly drawing from God’s strength,” (2 Cor. 12:10 AMP).

God was the only One who knew how to lead me out of super morbid obesity. And yet, He was the One I was rebelling against. I know I’m not the only one. Many Christians I talk to have the same problem. We want to do better, but we have not discovered the way to do that.

God has been showing me the way for at least 10 years now. He has clearly shown me that the victory He has given me over my food issues is not just for me. It’s for you, too.

That All May Hear

That’s why I blog, write books, deliver podcasts, post on social media, produce video, develop courses, speak at workshops and coach. It’s all so that those who need to hear this message will have a chance to have their own personal victories and transformations as well. That is my biggest prayer for every person reading this today.

Right now, I’m beginning the best course I have over in my Overcomers Christian Weight Loss Academy. Journey to Transformation will give you practical steps to lose weight and live healthy. It will lead you through understanding what your issue is with good, accepting that and then surrendering it to God.

Beyond that I will teach you tools to help you manage your cravings, change your habits, and develop your own personal lifestyle change plan. The course will take 14 weeks and is a part of our Overcomers Academy curriculum. We’re starting that today, Feb. 6.

To get in, join Overcomers Academy before Friday, Feb. 7 at noon CT. Do it now. Go here: https://TeresaShieldsParker.com/overcomers-Christian-weight-loss-academy/.

I’ll see you in the group.