The blessing of comfort food

When I was growing up, I felt my grandmother was as near perfect as a woman could get. She loved me unconditionally. As I grew up I realized no one, not even Grandma was perfect. Yet, I didn’t want to major on that. She was my Grandma and as the oldest grandchild, she and I had a special bond. I never wanted that bond to be broken, not even after death. I guess I’m thinking about her because she would have been 110 years old this week. 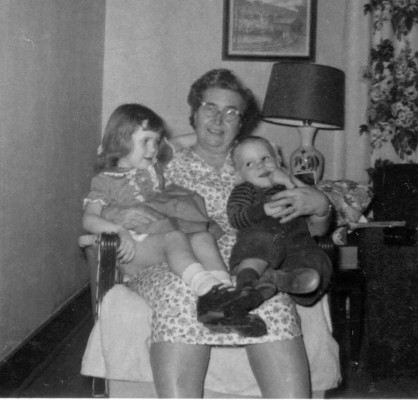 Grandma’s Kitchen was always the place to gather. It was large, sunny and always smelled of good things cooking. At Grandma’s house, it was the first place you entered, right off the porch.

Grandma was always there. It was her domain. She always wore a dress, plain with a waist. Most were made from “feed sacks” and were various patterns or designs of flowers. Blue was her color and many times her dress was a shade of blue. She always sported an apron.

She was a large woman with soft, mushy parts, just right for hugging. To me, she was the embodiment of love and protection and warmth and caring.

There were times she disciplined me, but she always told me why and then taught me the right way to do things so I would remember the next time.

She had the ability to carry on a conversation while doing anything-­making a pie crust, peeling potatoes, frying chicken, stirring together a fruit salad. While Grandma worked, she liked to talk. She had an inherent curiosity about people and why they did what they did.

When the family came for dinners, everyone was in Grandma’s Kitchen. It was, indeed, a country kitchen. On the table of the breakfast nook to the side of the kitchen one could usually find desserts of various fashions, cooked the day before. There might be other dishes waiting to make their way to the table. It was the “snitching” table.

No one ever left Grandma’s Kitchen hungry.

Grandma’s job was to keep everybody fed. Her day revolved around food to a great degree. If she wasn’t cooking, she was tending the garden, gathering eggs, dressing chickens, canning, churning butter and one of a thousand other chores on the farm.

If there was a large dinner she was doubly busy. If it was haying season she needed to divide herself into three parts.

I’ve never really discovered my exact love language. I think mine might be the sixth one–being served your favorite foods. Grandma would always have oatmeal cookies when I came. Invariably she’d make an oatmeal cake for me, chocolate pie for my Dad and mandarin orange salad for Mom, all in the same meal.

Hoecake, which is a fried cornbread, was a favorite of mine. No one knew how to cook it like she did. Actually no one even knew how she cooked it. Whenever I’d ask her for the recipe she’d laugh and say, “It’s so easy. There’s no recipe. Just white cornmeal and water. Put in the iron skillet and cook it.”

She’d promise to show me the next time, but the next time she would already have it cooking before I could ask.

I searched her recipe books after she was gone and couldn’t find nary a notation about it. I searched other recipes and tried many of them and none worked. I gave up.

Several years ago, I was chatting about life growing up with a new friend I’d met exercising in the pool. Grandma’s  hoecake recipe came up. My new friend said, “Let me do some looking.”

She came up with the recipe that tastes an awful lot like Grandma’s. And Grandma is right. There’s really not a recipe for it.

It’s white cornmeal, salt to taste and hot water. You add the hot water to the cornmeal until it makes a thick mush. Put a little oil in an iron skillet, add the mush and pat it down to spread. Cook it over medium heat. Turning the entire thing by putting a plate over the pan, turning it upside down and sliding it back in.

This is the hardest part and the part Grandma did with ease. I’ve made it many times since I learned the recipe. It is just one of many items that are comfort foods to me.

For me comfort food no longer has a positive connotation. I comforted myself with food up to amassing 430 pounds on my body. Food was no longer a comfort because I was so uncomfortable in my own skin.

Still, it was food I had always gone to for comfort. Grandma herself provided comfort to me. When she wasn’t around, the foods she cooked were the next best thing. If I wanted a taste of home, if I wanted to feel like a child again, I would go to food. I especially gravitated towards foods with high processed sugar content and high carbohydrates. I could make a meal on breads and desserts. Nothing else was needed.

There is too much to my weight loss journey to write here, but one thing I didn’t mention in my book was the realization that my beloved Grandma’s way of cooking actually led to my extreme weight gain. It felt dishonoring to her for me to not serve bread with every meal, three desserts and a big mound of mashed potatoes, gravy and other similar dishes we’d always had.

She always wanted me to lose weight and would tell me I would feel much better if I did. It wouldn’t be 30 minutes later, though, that she’d pull a batch of oatmeal cookies out of the oven and encourage me to eat as many as I wanted.

My mother tried to teach me the right way to eat with balanced meals and fruit for dessert. But with my mother’s emotional illness, it just seemed Grandma’s lavish spread was much more appealing.

Processing through how food played a part in my life, what I was taught about food, what I observed about food as a child and how I used food in my life was an important first step for me in changing my mindset about food and, therefore, about weight loss and gain.

I decided that it is all right and actually really good if I, as the the matriarch of the extended family, serve healthy real food rather than those things I learned to cook as a child watching my Grandma. I started more of a healthy eating tradition for my family. It is OK that they know when they come to my house, I don’t serve sweets. If they want them, they have to bring them.

I see it as establishing a family blessing. On my father’s side of the family, all the men were alcoholics back for as many generations as he could remember. He broke the mold. He wanted a different lifestyle for himself and his descendants. He began a blessing in our family that continues today.

My mother was trying to do the same with the food issue that runs deep on her side of the family. I resisted and perpetuated the generational curse by the way I ate and the way I encouraged others in our family to eat.

I’m so glad God finally got my attention and set my life on course. If I hadn’t gotten the message this time, I am sure I would be close to my former weight. It is a sad fact, but true.

Nothing, not even gastric bypass surgery, changed the way I viewed food. It stopped my consumption of breads and sweets for a while. However, after about a year, I was back to eating cinnamon rolls, cinnamon crunch bagels, cookies, brownies, cakes, pies, mashed potatoes and gravy, chicken fried steak, chicken nuggets, pasta and candy.

I can’t tell you my whole story here (get the book at the link below) but I can tell you this. God loved me so much He didn’t give up on me. He kept setting up situations for me knowing one day something would click and I’d wake up and change my mind.

If you or a friend of yours is categorized as obese, morbidly obese or super morbidly obese, time is running out. You must do something now before it is too late.

You can do this. You can change your mind about how you look at food.

I believe in you and so does Grandma.

What are your family food traditions?