The old man in the orange plaid trousers, tan shirt and red cap sat on the park bench and watched as the grade school boys played baseball.

He came every day to watch them swing at the ball, observe their stance, the placement of their hands on the bat, the way the pitcher threw a curve ball or lobbed one over the plate. He watched the outfielders attempt to catch a long drive and the infielders waiting to tag the runner out. 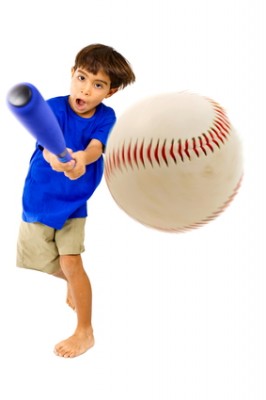 He watched them every day. He knew exactly what it would take to make this unruly gang of boys a team. They had the raw material. He saw it in their strength, energy and commitment to the game.

What they lacked was rule and a coach. Day in and day out, the old man wondered where the man was who could help, teach and encourage them to keep at it, to try to hit that curve ball just one more time or to show them the secret to catching a pop fly ball.

But no one came. And the old man felt sad for the boys.

One day a young, scrawny kid with no shoes and blue t-shirt came and stood along the sidelines looking longingly at the boys sweating and high fiving each other for a good play. The old man could see baseball in the kid’s eyes.

The others seemed to ignore him, just like they always did the old man, until a fluke happened. A high pop fly ball zoomed right in the newcomer’s direction. Without thinking the scrawny kid, jumped up and caught the ball in his bare hands.

It was a difficult catch. Suddenly the new kid was a hero and welcomed into the game. The old man felt great relief for the boy who definitely had a passion for the game.

Things didn’t go as well for the boy the rest of the game. He struck out all three times he got to bat. He missed tagging a player out at third base and he was no good as a pitcher.

Dejected the boy wandered over to the bench and sat down beside the old man and put his head in his hands. The old man instinctively patted him on the back.

“Yeah, but did you see me miss everything else? That catch was an accident, just like me.”

“I’ll tell you what,”  the old man said. “Come back in an hour and I’ll show you a few pointers.”

As the shadows began to fall, the old man didn’t sit on the bench. He went to the field and showed the boy how to hold the bat. He threw him some balls and had him hitting in no time.

The old man showed the boy how to pitch a strike while the old man hit every ball right back to him.

By the time the street lights had come on, the boy had become a ball player.

“You did good,” the old man said. “I’ve not seen some professionals catch on as quick as you did. You have a gift.”

“Even if I become the best player in the world, those guys won’t let me play with them again.”

“We’ll see about that,” the old man said. “Meet me here tomorrow about 2 before the others arrive.”

The next day, the boy was surprised to see the old man wearing a Cardinal’s uniform with a real number and a name above the number.

“Is that you?” the boy asked pointing the name on the shirt.

“I don’t know. Nobody seems to know me any more.”

“Well then, I’m mighty famous,” he sat pulled his red ball cap over his eyes. For the first time the boy saw the Cardinal’s logo and number. The cap had faded but the the shirt had much less wear.

The two got a head start on the game before the other boys arrived.

The old man was pitching and the boy was hitting home runs as fast as he could.

The other boys stood in amazement at what they saw.

“Who’s that?” the oldest boy asked pointing to the pitcher in the uniform.

“You think he’d give us lessons?” the older boy said.

“Maybe. You have to be willing to do everything he says. He knows his stuff. He don’t cotton to no clowning around.”

The old man agreed to coach the boys, but had several rules governing their conduct, play style and inclusion into a regular league. In addition, he asked them to move his bench closer to the field.

For you see he had one time been a famous baseball player and coach who had decided his time in the spotlight was over. He felt he should just sit and watch for the rest of his days. If I told you his name you wouldn’t believe me. It doesn’t matter any way.

Then, one scrawny boy showed him his gift mattered. And that made all the difference in the world.