There’s never been a time I didn’t think I had the world’s greatest daddy. He had a twinkle in his eyes when he was up to mischief with us, loved to tickle and play, would give the shirt off his back to help someone, worked hard in a hot job as a steamfitter foreman, loved his farm, lived for a chance to preach, was a friend to everyone especially those no one else would friend. 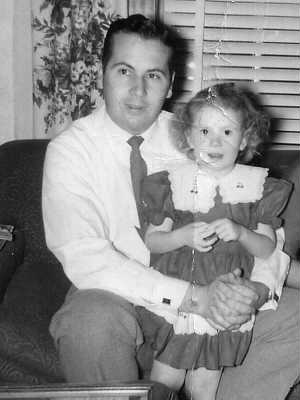 My Daddy and me.

Daddy never had a bad word to say about anyone. It used to upset me a little because if I asked why someone was mean or did something bad, he would say something nice about them. For instance, he might remind me of a time they were nice to me. That didn’t help when I was mad. I wanted someone to commiserate with me.

The interesting thing about my daddy is that he really didn’t have a good earthly role model to follow to be the great Daddy he was. His father had difficulty with alcohol.  A farmhand, the little money he made usually ended up being spent at the local tavern.

Dad was one of six children, so food was important. My grandfather would buy a bag of groceries but somewhere in the five miles between town and the farm where they lived, he would set the bag down. Most of the time it was when he climbed over a fence.

My daddy and one of his brothers would be sent back along the path he probably took to find the coveted sack of groceries.

And yet, I never heard my dad say a bad word about my grandfather only that he had a problem with alcohol and did the best he could without an education. Daddy was very strong on the dangers of alcohol and the advantages of getting a college education. He was the first in his family to get a college degree. And he chose not to drink alcohol even though he had plenty of opportunities in the Marines.

He is the reason I have never had a drink of alcohol, except the time one of Roy’s friends tricked me into drinking orange juice with vodka. When he asked how the juice was I said it felt hot on my throat. He laughed and told me what he had done.

I said, “So why would people drink something that could do them harm when it doesn’t even taste different?”

It wasn’t until I met my husband that I realized there are people who can drink alcohol and not get drunk. Those same people don’t have to drink alcohol if they don’t’ want to.

This was an entirely foreign concept to me. My perfect father told me it led to bad stuff. I had to wrap my brain around the idea that there are good Christians who drink and it all right.

I didn’t realize until several years ago the correlation between sugar and alcohol. Both are similar addictions. Alcohol is liquid sugar. Those who are alcoholics when they stop drinking many times start eating sugar and gain weight.

Most of the men on daddy’s side of the family back three generations had an issue with alcohol. So it was smart for my father to drill the no drinking thing into us. We had a metabolic tendency towards it as well.

On my mother’s side there are quite a few diabetics and those with weight issues. I come by my sugar addiction as a product of my geneology on both sides of my family

If my father knew this he would have banned the orange slice candies and buttercotches he loved so much.

I loved my daddy and I still consider him the most perfect father a girl could ever have. He loved the Lord with all his heart. If he had an addiction it was to Jesus. He knew God had rescued him from where he was and set him on a right path. He said many times that God was the perfect father and he was the one who taught him to be a father.D

Daddy was a Marine, a chaplain, a pastor, a hard worker, a true friend, a tireless prayer warrior, a mercy heart, an awesome daddy and a perfect Poppy. He taught us that every answer is found in the Bible. The reason he never talked bad about people is because he tried to see them through the Grace lenses God wears when he looks at us.

Daddy’s favorite song explains why he was the world’s greatest in the eyes of most everyone who knew him. He took the words of this song to heart. To hear it sung by the Blue Ridge Cutups, click HERE.

There’ll be no detours in heaven
No rough roads along the way
I’m using my Bible for a road map
My last stop is heaven some sweet day.”