Ever wonder who these curious wise guys, er wise men, were? You know who I’m talking about, those three kingly looking guys in your nativity set? And why did they travel hundreds of miles before cars or air travel to check out a promised Messiah to a religion they did not even believe in? 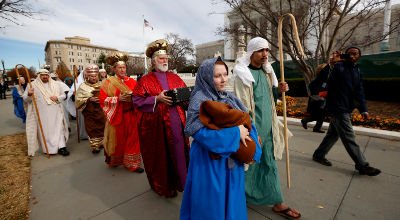 Actors dressed as the The Three Wise Men participate with a group protraying the nativity scene walking past the Supreme Court in Washington, D.C., in 2012. (Rueters/Jason Reed)

You’ve heard many times the saying curiosity killed the cat. Well, it’s curiosity that also allows the cat to be such an awesome mouser. Curiosity can actually one of a cat’s best traits.

The same could be said for these seekers, the curious, who had to understand the strange happenings in the sky. And so they set up, probably not just three but an entourage that included servants, portable housing, food for the group which may have number close to two dozen and their animals. It was a journey of curiosity that would take them probably near 1,000 miles.

Who were they and why did they take off? Most likely these were not kings, but astrologers connected with a king’s court, probably the king of Persia. At least we know the lived east of Israel.

They were men who were very intelligent. They were pagan astrologers, who studied celestial writings, the stars and their movements. Watching the heavens they began to investigate a marvelous and unique revelation, which happened when Jesus was born, Jeremy Risner, C2 Church lead pastor explained.

It was probably a combination of three various events that happened about this time, Risner continued. The first said to them that there was going to be a Hebrew king born. The second said it would be a mighty king. The third, a comet, said it was to a very great king who was born, probably the mightiest of kings.

Not only had the studied an ancient art of astrology, they had access to Daniel’s prophecies of a Jewish Messiah and King, such as mentioned in Isaiah 9:2, 6-7 .

All this made these astrologers, who job it was to understand what is going on in the skies and interpret the signs to their king, intensely curious. They had to find out what it all meant. Their curiosity drove them. “They had no concept of who this great king had to respond, compelled by the invitation of the stars,” Risner said. They would find out if it took them years.

The seekers and the small village traveling with them rode up to the city gates of Jerusalem asking where the child was who was born king of the Jews. The reigning king at this time was Herod, a very neurotic man who was afraid everyone was out to take his throne. The astrologers, though, were on a quest to find the answer to the puzzling sign in the skies. They were not concerned about Herod. They asked questions. If he’s not here, then where is he?

They were told that prophecies proclaimed that the Messiah would be born in Bethlehem. Shortly after they see the star, which might have been a comet, that they had seen in the east and followed it to a small cottage in Bethlehem where they meet Jesus, probably about two years old by this time.

It’s interesting these curious ones without any real religious belief or training met Jesus and immediately fell down and worshipped Him. They gave Him gifts: gold for the king, incense for the priest and myrhh for the Savior of the world.

They found who they were looking for, but they found much more. Matthew 2:12 says, “Being divinely instructed in a dream not to return to Herod, they departed to their own country another way.”

This is what the Christmas story is all about. They searched for something they didn’t understand. They would have made it their lifelong quest, like the cat searching for the mouse. They would not rest until they found whatever was driving them. They did not understand it, but they needed to.

When they found the little boy at the base of the star, they didn’t sigh and turn around and leave. They knew this child was different. This child embodied what they had been looking for.

Though they were not believers before that day, they left believers. They listened when the God of the universe instructed them and they went home different.

Christmas for some is not music, laughter, gifts and friends. Christmas for many is silence, loneliness, longing and emptiness. There is a curiosity, though, about this tiny baby in a manger who, no matter how much the world tries to cover up that Christmas is His birthday, always seems to show up to claim His day.

Many are seeking. They are following signs. Did you ever stop to think taht your life may be one of those signs someone is following?

Know this, just like the magi who searched until they found the Christ child, those around you are searching. They want to go home different. They want to see Jesus in you.

How will you be a sign pointing someone to Jesus this Christmas?
Sweet Grace: How I Lost 250 Pounds and Stopped Trying To Earn God’s Favor is available on Amazon in print, Kindle or Audible. Order your today by going to this LINK. Sweet Grace Study Guide: Practical Steps To Lose Weight and Overcome Sugar Addiction is available on Amazon, as well. Order the study guide by going to this LINK. If you haven’t post a review for these go to either of the links to do that.