God and the Quarter Lady

God is always speaking. We just aren’t always listening. This is a truth that I’ve come to realize by trial and error. The problem is we want the handwriting on the wall, the voice from Heaven, the dimensions of the ark. However, God does still speak in all those ways. 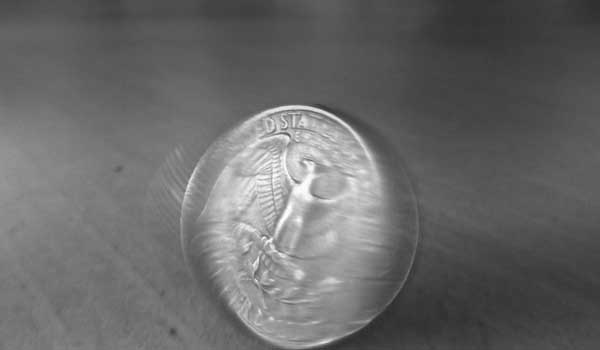 Even when he saw the handwriting on the wall and knew it was supernatural, King Belshazzar had no idea what the words meant. He had to call for Daniel to interpret them. They weren’t pleasant words. (See Daniel 5: 24-28, 32.) However that night what God said came true.

We want God to speak to us audibly like He did in 1 Samuel 3. In this case, Samuel thought the voice of God was his mentor, the priest, Eli. Each time Samuel heard his name called he ran to Eli.

Finally on the third time the elderly Eli figured out it was God speaking and told Samuel, “Go, lie down, and if He calls again say, ‘Speak Lord, your servant is listening,’” (1 Samuel 3:9 NLT).

God told Samuel He was going to carry out his threats against Eli and his sons, who were blaspheming God. When Eli asked Samuel what God said, Samuel told him truthfully. God continued to speak with Samuel and Samuel shared the truth with the people. Because everything Samuel said proved to be true, he became known as a prophet. (See 1 Samuel 3:19-20.)

God also spoke to Noah. He gave him the exact dimensions of the ark and what he was to do with the gigantic boat. Noah didn’t wonder whether it was God’s voice or not. He simply got busy building a boat for an event that might never happen. (See Genesis 6-7.)

I’ve heard people excuse away all the stories in the Bible of how God interacts with man and even to say that if He did do that back then, He doesn’t do it today. But, I know He does because He’s done it my life.

I used to say, “If God would just give me exact details like He did Noah, I’d do anything He wants.” That just isn’t true. There have been plenty of times God has told me specific things that I refused to do. Each time I knew it was God, but I just didn’t have the faith to act on what He said.

One specific time I will never forget. I had pulled into the medium-size grocery store near where we live. I was just going to run in for a few items I needed for supper. As I was gathering my purse, a woman knocked on my car window.

She was not shabbily dressed like the man in front of the store with a can panhandling for change. She had on jeans and a t-shirt, which were both clean. She looked like any other woman going into the store.  “Do you have a quarter?” she asked.

I couldn’t lie. I was sitting in my car and in the door handle pocket she could see I had quarters. I said, “Sure,” and handed her a quarter. She headed inside the store.

I rolled up the window, locked the car and went inside to get what I needed. Back at the car, I got in and put the groceries on the passenger seat. As I did, I noticed the quarter lady sitting in the car next to me.

As I watched, I saw the moment her face fell. She obviously didn’t win. She put her head on the steering wheel. There were tears in her eyes.

Go Talk To Her

That’s when God spoke to me softly as if whispering in my ear. “Go talk to her.”

“What would I say? You used my quarter to buy a lottery ticket? I’ll never give you another quarter again?”

“Really, God? What would I say? I have to have something to say.”

“Just talk to her. You know how to talk to people, right?”

“Not to her I don’t.” I said under my breath as I drove away. Turning on to the street, I heard God say, “You could have prayed with her.”

My Time to Cry

The words arrested me. I could do that. I could offer to pray with her. I went around and back into the lot, but quarter lady, panhandling man and her car were gone.

Now it was me sitting in my car crying. “God, if you give me another chance I will talk to whoever you want me to.” I stayed for a few minutes hoping she’d return, but she didn’t. Instead I prayed God would bring someone else to talk with her wherever she was.

I learned a valuable lesson that day. I am sure if I had obeyed God’s voice He would have given me the words to help the woman. I might have even found out the real reason she was looking for extra money and have been able in some way to share the love of God with her.

There was a reason God put her in my path. I will never know until I reach heaven what that was.

This not only taught me to not be afraid to talk to those God points out, but to act on what I know God is saying to me. The words of Jesus really came alive to me that day. “My sheep hear My voice, and I know them and they follow Me,” (John 10:27 NKJV).

As a child of God I am known by Him and He talks to me. If I hear His voice and do what He says then I am one of His. If I don’t then I am either not His child or I am rebellious and need to repent. For me it was the latter. I was truly sorry and repented.

God was leading me to understand that He really does speak to me. It could be in any number of ways, but I know beyond a shadow of a doubt when it is Him. I know His voice and I also know that whatever He is leading me to do He will give me the strength to do it.

First, though, I have to move my feet. I have to take the first step.

This has been more than true on my journey of losing more than 250 pounds. He spoke to me about living a healthier life through scripture, friends, pastors, doctors, coaches and His very presence in my life.

He always made what He said clear and plain. Although I didn’t always follow, He continued giving me the same consistent message.

Learning to hear, listen to and follow God made all the difference in my transformation. There were times I got it wrong, but God was always there to help me turn my failures into successes by learning from them.

Those I coach in Overcomers Academy know that I have made pretty much every mistake possible on my weight loss journey. I also made every excuse why I couldn’t go forward or lose weight.

I know God called me to be a weight loss coach because I’ve been there. I know it’s hard, but I also know how easy it becomes when we simply surrender to God. That’s the only way I lost the weight.

Along the way I’ve become a life coach, inner healing coach and ordained minister. I coach others like I was coached with a hug and a swift, but loving kick in the back side to get folks headed in the right direction. In other words, I encourage and challenge.

After doing this for over five years, I am well aware that people love to come into our community and post about their successes, but few will come in and be honest and post their failures.

I can’t help you if all you do is talk about your success, even though I want to hear that too. However, when you fail and share, that’s when I can help the most. I can help get you back on track towards your goal. I can help you make new plans and new habit changes. I can help ferret out the root issues holding you back.

The truth is we will always just be going around the same mountain until we embrace our failures. Failure is the best teacher. It teaches us what is not working, so we can find what is working.

I see you out there. I know you think you are the only person in the world that God can’t help. You are wrong. You are the exact person He wants to help. You just need a coach and a group to help you go forward. Thankfully we have both. Join us today.