The God of Triumphs and Tragedies

In the midst of the time when your life story is crashing around you, do you run to God or away from Him? When Darci Risner’s baby stopped moving inside her at 39 weeks, her story crashed.

Darci and her husband, Jeremy, decided to take the option of having a c-section to deliver their baby, whom they were told would be born dead. 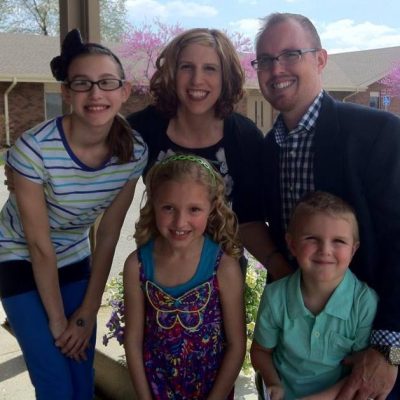 “It felt like I was in a bad dream,” Darci explained. “I just wanted to wake up and the bad dream would be over and everything would be all right. But that was not possible.

Their pastor prayed with them before the baby was delivered asking God to perform a miracle and heal their baby.

They went into the delivery hoping and praying in faith for a miracle. When doctors delivered Franklin all was quiet.

“I wanted my baby to cry,” Darci said. “But he didn’t. The doctor said he was perfect, but it just made me ask, ‘God, why did you have to take my perfect baby.’”

They learned that Franklin had an extra long umbilical cord which had a knot in it which formed a knot in it and resulted in his early death.

Since the baby was perfect, the doctors agreed to allow she and Jeremy and their daughters to keep him in their room.

“I wondered if I could make it through this day, which would the only memories we had of our son,” she said. “1 Peter 5:7 became real to me as I cast all my cares on God.”

A nurse helped record Franklin’s handprints and clip a lock of hair. A group of parents who had lost children had a basket where the Risners each picked out rocks with words that were memorable to them.

They choose a rock for each of them including Franklin. The words on their rocks were hope, strength, love, trust and faith.

“The word faith is important,” Darci said. “No matter what the outcome of any difficulty, God is a God of triumphs and tragedies.”

In times of utter despair, strength comes from Christ. She pointed to Philippians 4:13, “I can do all things through Christ who give me strength” as evidence of that.

His love saw her through the darkest times. “There were times if I wondered if God was there but I remembered the words of the poem that says when you didn’t feel God that’s when He was carrying you. His love definitely carried me through those days.”

Romans 5:2-5 talks about the hope that God brings. In verse 5 it says, “Now hope does not disappoint, because the love of God has been poured out in our hearts by the Holy Spirit who was given to us.”

Again in Romans 15:13 it talks about hope. “Now may the God of hope fill you with all joy and peace in believing, that you may abound in hope by the power of the Holy Spirit.”

Those verses sustained Darci in the fact that God is a God of hope and has plans of which we have no idea.

“It’s the idea that Jeremy discussed last week when he talked about the confusion that comes when we want God to heal and he doesn’t do it the way we want,” she said. “Faith, though, is belief and dependence on God’s character not His action.”

Franklin was the Risners’ third child. They already had two girls.

“Of course I was closely watched during the pregnancy,” Darci said. “When he was born, we learned just how much of a gift from God, Robbie was. His cord was also knotted.”

I relate on several levels to Darci’s story.

My son, Andrew, went into distress when I was 34 weeks pregnant. When he was delivered by emergency c-section, his cord broke. The doctor caught it and pinched it closed to save his life.

The cord had been compromised at a point resulting in a ballooning. In other words, if it had been a few minutes longer we would have lost him.

In the hospital with things going fast and furious, I remember breaking down and crying uncontrollably. My mother was in the room and asked what the problem was?

“My baby may not make it and there’s nothing I can do about it.” This was my first-born. Would he live? If he didn’t would I be able to have other children? I was already 30.

My story seemed to be crashing around me at that moment.

My mother said, “Don’t worry, God can do something about it. This is my first grandbaby. He will be fine. And if he’s not, God has a better plan.”

My mother’s words calmed me. They were life and truth at a difficult time.

He did survive and is an awesome Christian man now. In the struggle of that moment, though, I needed to be reminded of the fact that God is God in the midst of both triumphs and tragedies. Would I choose, like Darci did, to trust Him in the difficult times as well as the great times?

No matter what happens, will I choose to say, “It is well with my soul?”

In the midst of their tragedy, Jeremy sang that song to his wife as a remembrance of what really matters.

Whatever difficulty you are going through today, belief this, God will meet you where you are and help turn your story into something beautiful. Just ask Him.