Fat is not contagious, but I lived like I believed it was when I was super morbidly obese. Recently a missionary friend of mine, Terri Novini, posted some old pictures . 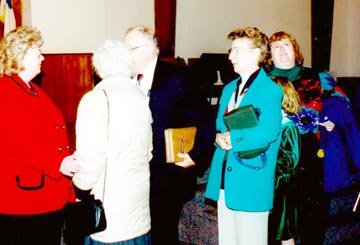 I rarely hugged people back then. And if I did, it was a kind of side pat on the shoulder hug. I was afraid to get too close and allow my mountains of flesh to lap over on someone else.

Anyone who knows me now knows that’s not the way I hug these days. You get all of me full on, no holds barred.

Back then, though, I was afraid they would think me disgusting and want to run the other way. After all, I wanted to run away from myself.

I hadn’t remembered that feeing until I saw the look on my face in the picture. In reality I almost looked scared, like someone would come and hug me at any moment and realize I was obese and never talk to me again because I had invaded their space with my huge body.

Today, having lost more than 260 pounds, I know I believed a lie the entire time I was obese. People are people whether they are large or small. The value of a hug is in the personal contact.

Everyone needs a hug every now and again.

From March-June I led a Sweet Grace study at our church. One of the most memorable sessions for me was the session of fears.

The women wrote their fears on a piece of notebook paper and without sharing them with anyone, threw them in the fire.

They did this one at a time as they felt moved to. When the time was right, I went and hugged them.

I didn’t do a quick side hug, I grabbed hold and held on even when they were ready to let go.

The moment they were getting uncomfortable with the hug, the tears began to flow. Then I knew we had hit pay dirt. The deep hurts and pains were being released all through the power of a hug prompted by the Holy Spirit, the supreme Comforter.

It came because of personal contact, invasion of space if you will. But mostly because of care and concern for another fellow traveler on this journey.

We lie to ourselves all the time. We think no one wants us to touch us, share with us, care for us.

In reality, everyone needs that whether it is from someone extremely overweight or skinny as a rail.

Fat is not contagious, but caring for another can be and should be contagious.

When I was so obese, I thought more of myself than if another person might need a hug.

They would be wishing someone would sit down beside them, give them a hug and tell them it’s going to be alright.

As we begin to heal from the negatives emotions that hold us captive, the blinders begin to come off. We start to see there are others out there who are hurting.

There are regular-sized people, some I consider to be the “beautiful” people, who have hurts and pains deeper than I could ever in a million years imagine.

I can see them when I look in their eyes instead of gazing at my own belly button. I began to see. Others do not really care how much I weigh. They just want me to love them.

When we came to the church we call home, I was hurting from difficulties in another church. I remember that first Sunday going forward for prayer.

Marilyn Hargis took one look at me as I came forward, grabbed me and held on in a bear hug. She prayed for me and kept holding on even when I wanted to let go. I was super morbidly obese, but she did not see that.

What she saw was a soul in need of being accepted and cared for. Her hug provided the healing touch I needed. I have ever forgotten that hug.

It took me a while until I could hug like that.

I first had to put my own agenda aside and see the hurt inside another. I have since come to not only be able to see the hurt, but feel it and almost touch it, as well.

When I am willing to be used by God in another’s life, putting their needs before mine, God is genuinely pleased. Not only that, He gives amazing insights into their needs and meets them through me as His hands and feet here on this earth.

It may just be a hug, a word, a note, but it is more about them than about me. It is bearing another’s burdens,1 which Paul says is fulfilling what Christ desires. John adds that loving other is a command of Christ.2 Peter goes so far as to say we should greet one another with a holy kiss.3

No, fat is not contagious. It can be warm and welcoming when attached to a soul that genuinely cares for another human being.

Along with losing physical weight, we need to lose the emotional weight attached to our size. Embracing ourselves as a human being capable of being of value to another person is one of the first steps towards becoming healthy—body, soul and spirit.

Sweet Change Weight Loss Coaching & Accountability Group is Teresa Shields Parker’s new group on living healthy through a total renovation of body, soul and spirit. Teresa chronicles her journey in the memoir, Sweet Grace, and the practical application workbook, Sweet Grace Study Guide. Also, get a free chapter of her memoir at Teresa Shields Parker.com. Connect with her there or on her Facebook page.