I attended a small church in my neighborhood. The youth group wasn’t large, maybe 10 or 12. My two best friends were several years older than me and they were dating two brothers who were around their ages. 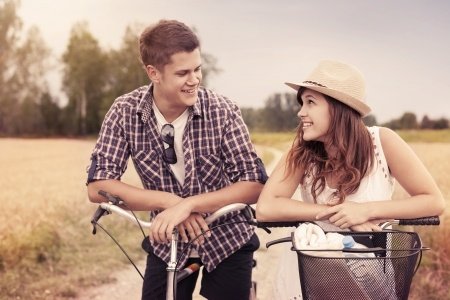 The brothers’ had a good friend who attended our church so it was natural that the six of us were together a lot. John, not his real name, was a couple of years older than me. One day at church he asked if he could talk to me.

“We’re both hanging around with our friends who were dating and I thought, maybe we should start dating.”

I wanted to shout, “Yes!” However, my mother had always said I couldn’t date until I was 16. I’d be 13 in three months. I couldn’t see her saying yes ever in a million years.

I explained all of this to him. He said, “What if we just did a bike date and rode over to see the matinee in the afternoon.”

I was ecstatic when my mother said John seemed like a nice boy and since it would just be like two friends going to the movie and not alone in a car it would be OK.

I don’t remember what we saw at the movie. I was too excited that he held my had!

We sat together in church at every service. On Wednesday nights, the girls and boys had separate mission groups. We’d sit and talk or play hid and seek in the church basement. There alone in the dark, he gave me my first real kiss.

After that, I dreamed of marriage. Yes, we were young, but we’d make it. Really, 12 and 15 aren’t that young. (By the way, this is why I’m adamantly against young teens dating.)

We spent time with our friends that summer. And we had another bike date and one date where my mother took us to the movies and picked us up. It was “Georgi Girl”. I didn’t like the movie. I felt just like Georgi Girl, frumpy and fat.

My two friends were skinny and beautiful. Plus John told me he wished I would talk to him more. I’m a pretty good talker, but I what do I talk to a boy about? I know how to talk to girls, but boys?

All too quickly the summer was over. I entered junior high school; he entered high school. I saw him at church, but he stopped sitting with me. Then one of my friends told me they saw John walking with a girl at school. My friend said, “I just don’t want you to be mortified if he brings her to church.”

It was still a shock when he did. In my book, he was my only. In retrospect I realize we’d really only had three real dates. The rest of the time wasn’t really a date, just having fun with friends.

To him, I was just a girl he had dated a few times. To a 12-year-old with a huge crush, it was as if we were married and he cheated on me.

My stomach rolled when he walked into church on a Sunday Night with Penelope, not her real name, on his arm. To cover the sucker punch, I immediately decided I would be nice to her and act like it didn’t bother me.

I went up to her, introduced myself and told her I was happy she’d come to the church. “Want me to show you where the ladies room is?” And so a friendship with Penelope began.

I was devastated, but dared not show it. The little voice in my head said, “Don’t show your pain. Don’t be vulnerable or you’ll get hurt all over again.”

After my gigantic act, I went home, sneaked a bag of cookies and a bag of chips and carried them up to my attic hide-away. I ate and dreamed of how it might have been if I could have learned how to talk to John. Then, I’d eat and dream some more. The food seemed to ease the pain a bit and bolster my courage.

The next week at church, I invited Penelope to sit with me during the girls’ group. I could talk to her. She was nice. She could drive, so a few times she picked me up to hang out. She’d say, “What do you want to do?” I’d say, “I’m starved.” And we’d go get pizza or burgers. It was my way of burying with the pain. I never told her about John and I doubt he ever mentioned me to her.

I never really dealt with the pain, I just fed it so it would be quiet. No one needed to know how hurt I was. When my friend who warned me about John seeing another girl asked me how I was doing with John and Penelope, I said, “Oh John and I were only friends. Penelope’s more his age any way.”

Inside it hurt like a million daggers thrown at me at once. My stomach felt like it was in my feet and my heart was pounding a 1,000 miles an hour.

I was 12. I had a broken heart. The only way I knew to fix it was to put a smile on my face, hide my pain and act like I was friends with the girl who helped break my heart.

In a way, I should be grateful to John. He kept me from wanting to have a serious relationship all the way through high school. There were guys and I would try, but first of all none of them were John and second of all, I was too scared to get too close for fear I might like them and they might dump me.

I was the girl with whom guys felt at ease because I didn’t want a relationship. I was the friend, but never the girlfriend. It kept me pure.

It was between my sophomore and junior year of college I met my husband, but that’s another story.

The lie becomes a stronghold

Suffice it to say, the lie that got embedded in me was this pain, that felt like the greatest of all pains, could be assuaged by food.

In high school, I worked a job after school and almost all of that money went to buy my favorite foods, going out to eat with friends and stuffing myself. I felt a lot like “Georgi Girl” still and so I ate to fill that pain that said I wasn’t the right girl, the right size, didn’t have the right conversational skills, didn’t wear the right clothes, didn’t laugh the right laugh.

It didn’t work. The pains we learn early in our childhood years stay with us until one day we become an adult and weigh an ungodly amount of pounds, a size God did not design us to be, living with a heart built for a body two-fifths of the size we have morphed to.

The pain we tried to bury for years, we are now carrying around on the outside of us. And though we can force ourselves to lose weight by highly restricting the amount of food we eat, even if we lose the weight, we will eventually gain it back.

What we have done is allowed food to become a stronghold in our lives. It happens gradually. We aren’t really aware of it, until we find ourselves stuck in a tomb that we live in. We have allowed ourselves to be put in prison.

We have programmed ourselves to deal with pain in a certain way rather than admit it, forgive those involved and hand the pain to Father God. God in His compassion and mercy will give us something amazing in exchange for our pain.

When I handed Father God my pain from this specific incident, His gift to me was a loving husband of 37 plus years. And He added, not as an afterthought, “My most precious gift to you was my Son, the perfect companion. The one who has endured more paid than you ever have or ever will have to endure.”

Jesus willingly went to the cross and went through every imaginable pain. It was a physical pain, but also an emotional, mental and spiritual pain. His suffering was total. And He did it so that none would have to perish but all could have a way to the Father.

Through Adam, one man, sin and thus, death, entered the world. “But God’s free gift is not like Adam’s sin. Many people died because of the sin of that one man. But the grace from God was much greater; many people received God’s gift of life by the grace of the one man, Jesus Christ!”1

Teresa Shields Parker is an author, speaker and coach. Her new book, Sweet Change: True Stories of Transformation, published Dec. 2014 is now the #1 Christian weight loss memoir on Amazon, shares the stories of 17 individuals on the weight loss journey and includes much information from Teresa. Download a free chapter HERE.

In her first book Sweet Grace: How I Lost 250 Pounds, she shares transparently and openly about the challenges of losing an extreme amount of weight. Sweet Grace Study Guide gives practical tips on weight loss.

Downloadable pdfs of all books are available under the products tab.

Sweet Change Weight Loss Coaching and Accountability Group provides support, encouragement, weekly videos, action steps and an online group for those wanting to be intentional about their weight loss efforts.

To request Teresa to speak at your event, please contact her here.