I went to Graceland today in the physical sense as in the home of Elvis in Memphis, TN, but I’ve been living there, especially this year, in the spiritual sense. Maybe you, too, would like to live in Graceland. See if you can understand what I mean.

The year of 2013 was for me, the year of Grace. I knew that was my word at the beginning of the year, but I had no idea how it would turn out. 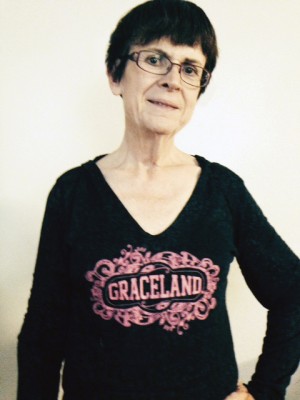 In January of last year, all I knew about Grace was that it was the thing that happened at age seven when I accepted Christ. It was, and still is, that for-Grace-are-you-saved-by-faith thing that God does and I am forever ushered into His kingdom.

I love that aspect of Grace. There is no real reason for God to extend Grace to me or any other person. We don’t deserve it and we certainly cannot earn it, but He gives it freely.

By January of 2014, Grace has become “the operational power of God that helps me do what I couldn’t do one second before,” as Kris Vallotton would say.

These are not just words from some preacher, though. To me they are so real I can reach out and touch them. And I do every day as I run my hand down my side and realize there is 260 pounds less of me here now than there was 10 years ago.

I reached for food to bolster me, give me courage, anesthetize pain, help me celebrate, reward me, bring me back to even keel, protect me and comfort me. It was like a best friend who never left, always within reach, always bailing me out or so I rationalized.

Food, however, was also the source of pain and discomfort as I wrestled against my flesh that seems to fight me at every turn. I couldn’t not eat sugar and bread. In some form or another, it was all I ate.

I had a lot of willpower. I could sustain a diet for six months or so and lose a lot of weight. However, after losing, I’d celebrate by eating whatever I wanted and gain it all back again.

After doing everything known to woman to deal with the issue, including gastric bypass surgery, I finally gave up.  I lost weight with surgery but after a year, I realized I could eat sugar and bread again. So I did and began gaining weight again.

One day I looked at what I was doing to myself and realized if I continued in this vein I would be dead quickly. I was literally eating myself to death.

It’s then I discovered an aspect of Grace I never knew existed. It is power clothed in the fluid movement of a dancer. In order to present controlled movement, any dancer must have strength to sustain the flow. It is Grace in action.

Grace began when I was seven and seemed to lay dormant most of my life. I hadn’t activated it because except for the day I accepted Christ, I hadn’t exercised it. I was an I-can-do-it woman. And although I never said it out loud, by my actions I was saying I didn’t need anything else, especially not Grace because I already had that.

I tried to make things happen myself. I dieted. I took pills. I drank protein shakes. I went on expensive weight loss programs. I had gastric bypass surgery. I was I-ing myself to my own demise.

What God was patiently waiting for was for me to give up. When I am weak, then and only then can God become strong on my behalf.1 I was holding on so tightly to try to make weight loss happen that I was preventing God from working in my life.

There is such a fine line between trying and giving up. No one wants to give up. We are pull-ourselves-up-by-the-bootstraps people. We’ve got this. We can do this. If we are honest, though, that’s not working for us and we know it.

It wasn’t working for me. So I gave up. I laid down my compulsive need for sugar and bread. I surrendered it on the altar. It had been my god. Sad, but true.

When God saw I meant business and I was walking away from the thing I’d gone to all my life instead of to Him, His Grace became the wind at my back or as Kris says, the operational power. He motivates me, pushes my boat forward, plows the field ahead of me, tosses the dirt in behind, runs and dances alongside me.

The hardest part of this journey is to stop trying.

The easiest part is to allow God to be God.

The most exciting part is to watch God restore my health and vigor.

The most joyous part is to know for however many more days I am on this earth, I am now living them walking hand in hand with the Master.

This area I’m living in, this land, if you will, that I call my body is an area of energy propelled and motivated by Grace.

It’s as if I’ve moved out of my body into another. However, it’s the some body, only totally transformed into a field filled with the sweet aroma of His redeeming,2 restoring,3 resurrecting4 abundance5 of Grace.6

I’m living in Graceland and I’ve got the shirt to prove it.