God really does have a sense of humor, though I couldn’t see it when I was a frightened 12-year old. All I saw was my abject failure as a public speaker and, of all things, it had to happen at Christmas. 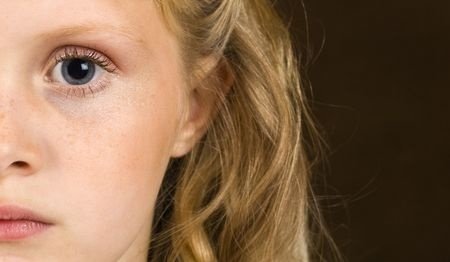 Every year, Grandma would pick out a “piece” for me to memorize and recite during the Christmas program at her neighborhood church’s program.  She loved having me join the program and I loved learning and reciting the poems she picked for me.

The year I was 12, Grandma decided since I did such a good job learning one poem a year, she would have me learn and recite two poems.

Problem was, when I got up to speak, the two got jumbled up in my mind.  I recited five verses of the first six-verse poem and then, stopped and stared at the packed house. There were words in my head, but I was sure they were from the other poem.

I stood frozen center stage in my black and red plaid dress with black patent leather shoes and white socks. Grandma was in the front row trying to tell me the next line, but she didn’t have the poem with her and I knew the words she was mouthing were not the correct words.

As a sea of faces stared back, I ran off the stage, out the back door to the safety of the huge oak tree out front, where I remember Grandma teaching Vacation Bible School. That day, though, was not a balmy, summer day. It was freezing.

Tears streamed down my cheeks. All I could remember was the shocked look on Grandma’s face as I ran down the aisle past her.

She did not come to find me. Eventually, I went back inside and sat on the back row. After the program, Grandma apologized for making me try to learn two poems. Other well-meaning folks lied and told me I did a good job.

It only made me commit more solidly to the oath I swore at the oak tree. I will never speak in front of an audience again.

For years I kept that oath. It wasn’t hard. I would want to speak and I’d be fine until I got on stage. Then, I would begin shaking, perspiring and feeling like I would throw up. I would do such a horrible job, no one would ask me again.

In 1994 I was part of a workshop which changed my life in many ways. One exercise we did was to memorize and lip sync a song in front of the group. We were “judged” by those in the seminar standing when they experienced us being real.

My fear of being in performance mode was heightened. Not only would I be in front of people and parading all 430 pounds of myself, but I was going to be judged.

Nothing about it appealed to me. The 12-year old girl wanted to find the oak tree really quickly. Since the fiasco at Christmas, I had felt public speaking was just not in the cards for me. I never asked God to deliver me from my fear of public speaking. I just accepted it as part of me.

You Light Up My Life

My time came and the song started. “You Light Up My Life” by Debby Boone. At the end of the first verse and into the chorus, I was still shaking and those in front of me were still sitting.

The chorus is simple. “You light up my life, you give me hope to carry on. You light up my days and fill my nights with song.” As I sang the words, I started pointing to each person, looking them in the eyes. As I did, they began to stand.

The trainers, though, still weren’t standing. Through the next verse and into the chorus I began pointed to each trainer and they began standing. At the final chorus, the group began pointing back at me.

I sang the rest of the song through a veil of tears, their tears joining with mine.

I looked up to see the workshop director standing on top of a table joining me as tears streamed down his face. Somehow I knew, speaking in front of people would never again be a problem.

God had taken that fear and replaced it with a group of people showing me God’s perfect love.

Oaths sworn on oak trees don’t last after all. Either that or God has a sense of humor or both. Today, I speak, coach, lead workshops and do television interviews with ease.  I didn’t set out to do this. I just sort of fell into it. In reality, I think God set me up. Even now I can hear Him chuckle about this turn of events which didn’t take Him by surprise at all.

The first time I really tested my lack of fear of speaking was at the Sweet Grace Book Launch in 2013. When I got up to speak, I shared my story without the notes I had on my ipad. I loved every moment of speaking and knew I had discovered another way God had set me free.

The first TV show I did was a little disconcerting. It was a secular morning TV news program. The spot was only five minutes. It was a great introduction for me into the very exciting world of TV Talk Shows. Since then I’ve been on many other television shows and live talk radio programs.

For many years I had left the little girl version of me crying at the oak tree on that cold December day. She remembered she couldn’t count on adults to help her when she was in bind. She was scared, alone and embarrassed to be on stage with what seemed like the whole world watching.

Although Grandma did not set me up for failure and did apologize for giving me two poems to learn, the fear was still very real. Only experiencing a group filled with honest, perfect love was able to break my bondage of fear.

Sure I was an adult and knew those fears were childish and ridiculous, but the little girl inside had experienced them emotionally. She needed to be acknowledged, love and accepted.

I was only scratching the surface of the power of God to deliver me from bondages of fear which had sources which began in childhood. In the years to come, I would learn His power would set me free from things which ran much deeper and held me captive to my own body.