What Do You Tell Your Children About Christmas? 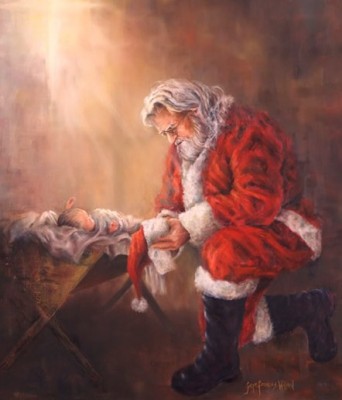 “Every Knee Shall Bow” by Gaye Frances Willard, 2009

Tonight when you tuck your children into their warm, cozy beds,

Don’t tell them stories of sugar plums that dance in their heads.

Instead, let them hear of God who sent His only Son to earth

So people everywhere can have everlasting life, new birth.

Tell them of a manger, angels, shepherds and very wise men,

Who traveled to see the Christ child who would save them from their sin.

Do not tell them a story of myths and once upon a time,

But a true story that makes the ordinary sublime.

Tell them of Mary and Joseph and a real, live baby boy

Who grew to be a man who only brought peace and love and joy.

Until one day jealous and angry men took his life away.

They nailed Him to a cross and they were done; dead they thought he’d stay.

In that moment as the entire earth held it’s collective breath,

Every boy and girl, man and woman a chance to really live.

It’s His life we celebrate across the world on Christmas Day.

Not some rotound man in a red suit with jolly words to say.

Santa is a fictional story and that’s OK to say.

Jesus is real and He’s the reason there is a Christmas Day!

If Santa were there that day, he would not be guiding a sleigh,

He’d be kneeling, worshipping the One who is the real, true Way!

Tell your children the true meaning of this very awesome day.

Tell them Jesus is both God and baby laying in the hay.

Tell them how Santa is just a fable, a fun story. See?

Belief in Jesus, though, has the power to set all people free!