There is a big sign in heaven, “It says Authors Wanted, Apply today. Rewards Guaranteed.”

God is definitely doing something new. He says, “Don’t you see it? Don’t you get it? I’ve opened doors that have never before been open in history. I’ve made a way in what used to be a narrow market. Now, it’s wide open territory to share my word in new and exciting ways.”1 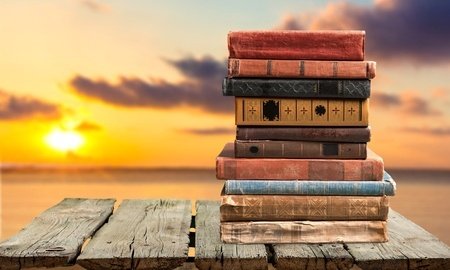 Back in the days I was growing up, there was no way for me to self-publish a book and have it immediately available to over 90 million people who visit Amazon.

It’s really a new era. It’s a time when I can carry as many books as I want on the kindle app in my smart phone. Anywhere I go I can read from the last place I read whether that was my actual kindle, my kindle app on ipad, Macbook or iphone.

These are things I never dreamed of when I was a kid. When I was 12, we studied a unit in science on the future. We were supposed to write a paper about what new things might happen 50 years in the future.

Back then, computers with the same power my iphone filled rooms at the university in our town. One kid wrote about how a computer would fit in your pocket and how you could watch television shows and listen to records via that small computer.

Of course, I thought he was crazy. Records fitting into your pocket? Televisions so small you could carry them? My brain did not have categories for such thoughts.

God has swung open monumental doors in my lifetime, doors I couldn’t even imagine when I was a kid. The fact that I don’t have to have a huge publishing house stamp an approval on a book I want to write in order to publish it is unbelievable.

It’s just been within the last few years we have begun to understand, book publishing is not that expensive and not that difficult to do. You do need a few professionals to help your end product be the best it can be, but it is extremely doable for the average person. And surprisingly inexpensive.

How Not To Do It

A would-be author can dump a Word file in Createspace, choose a stock cover and have a book on Amazon quickly. Then, dump the same file in the kindle formatting program and have a kindle ready to go.

I don’t advise that, though, unless it’s something you are just going to give to your grandkids for their birthday.

If it’s a book you’d really like to have look professional, you need to hire professionals to help you. Here’s where you can get taken big time. There’s a lot to designing a book, a cover, back material, ISBN numbers, copyrights, library of congress numbers and any myriad of other details.

Navigating the book publishing field can be treacherous. I have a free ebook with all the contacts, but in reality you also need someone to hold your hand through the process, give you advice about whether or not the book is worth publishing, help you with structure, forewords, introductions, epilogues, next steps material and so on.

Here’s the truth. Publishing houses today depend on authors to sell their work. They have a marketing department, but if you are an unknown author they don’t have much to work with.

With the advent of the internet and social media sites, such as Facebook, Twitter, Pinterest, Instagram, LinkedIn, Goodreads, Periscope and a myriad of others, the world is at touch of a button. However, how are you able to reach the ones who want or need your book?

In 2013 I went to  two breakout sessions at a writer’s conference. One was with a publishing representative, the other with a person proposing self-publishing as the best avenue.

At that point, with a combined total of 1,000 on my social media platforms, I felt defeated. I had just finished writing Sweet Grace. Now what?

I chose one platform to focus on and got busy growing my Facebook page. Now two years later, I have a combined total of more than 33,000 and growing on my social media platforms.

I published my book BEFORE I had the recommended number, but I was growing it as I was selling. I’ve been approached by publishers, but looking at the numbers I wonder why I would ever go that direction. If you have the resources to invest a little in yourself, it is so much more profitable in the end to self-publish.

The reality is, though, it’s not about the money, it is all about the message. God wants the message proclaimed. He promises rewards beyond what we can think, ask or imagine.2 I really don’t think that mean monetary rewards. However, why not be smart about it, if it does?

We each have a message to share. Mine comes out of the mess I made of my life and how God worked with me, and is still working with me, to clean it up.

We all have a message to share with the world. The possibilities are endless. Ninety million people from around the world visit Amazon. Each of them have the possibility of reading your book.

God wants authors. Will you answer the call?

Would you like to get your book finished in six months? Write the Vision Coaching is a group designed to help you do just that. The group is open now, but you need to hurry. The group closes for additional participants on August 31, 2015.  Go HERE to read all the details and sign up. You could be holding a book with your name on it in six months!