Esther took another white picket and drove in the ground.  Her thoughts were knocking around in her head. She couldn’t get over the fact that Arnie, the one who promised to be with her and her only, had been with another woman. 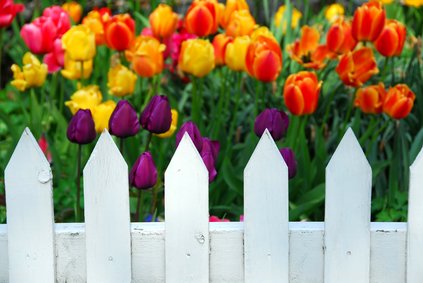 The flower garden had been his idea. He grew various types of tulips and said it would be nice to have a white picket fence around his garden.

The hammer was heavy in her hand. She smacked the stake and tried not to think about Arnie and that woman. She knew she should forgive, but it just seemed impossible.

Arnie said he had been drawn to Leila because she was having problems with her husband. It started innocently, small talks at the coffee pot, longer talks on breaks. Leila had poured her heart out to him and he had listened.

In the meantime, Esther couldn’t wait for Arnie to get home so he could fix the broken water faucet and help Eddie with his math homework and talk to Billy about being rude to his teacher.

She took another picket and pounded it into the ground beside the first. She never felt this would happen to her. Arnie was a good family man. He loved his boys. He loved her.

What was it he saw in Leila? Could it be he felt Leila cared more for him than she did? She knew as long as she lived, she could never forget what he had done to her, to their family. She drove another picket in the ground.

Planting and tending the tulips was Arnie’s hobby. It soothed him, he said. He really didn’t have time to build the fence. She had volunteered for the job. She liked the yard to look orderly. Right now, driving the stakes kept her from throwing laundry, plates or worse.

Arnie had confessed to her. He told her it had only happened one time. He said he felt Esther didn’t see him as her knight in shining armor like Leila did. Leila needed him. Wanted him. Esther put up with him and nagged him about everything he had to complete the minute he walked in the door.

He had said he knew love was commitment and he had broken his, but he wanted his family back. He wanted to start over.

He had asked for her forgiveness.

With each board she drove, she tried to forgive. Whenever she tried, thoughts of what Arnie and Leila did togther overwhelmed her. What did they talk about? Where did they go? Why did he do it? It felt as if Arnie was driving the pickets straight into her heart.

The constant barrage of images and thoughts had taken her prisoner. They swirled around and around in her head. She begged them to stop, but still they came until she could take it no more.

She hit the next stake so hard it broke in two with a loud crack. Sobbing, she looked at the crooked and uneven pickets she had banged in disarray. She couldn’t keep her man and she couldn’t build a simple fence.

“I can’t do anything right,” she cried out loud. “I want to forgive but I just don’t know how.”

Esther looked up to see Irene, her elderly neighbor.

“No one knows how to forgive, especially if they have been hurt. Forgiveness comes by simply doing it.“

“I imagine the ‘him’ would be Arnie. I forgave George years ago for something that almost tore us apart.”

Esther looked at the ground. “How did you do it? I just can’t get what he did out of my mind. It rolls around inside there constantly.”

Irene leaned on her cane. Her blue eyes seemed to mesh with the sky as she lifted her head. Then closing her eyes, she spoke.

“It’s kind of like building a fence. Whenever you have a thought about what happened, you take a picket and drive it in the ground, not haphazardly, but true and straight. As you do you say, ‘I forgive Arnie.’ Then the next time you have a thought, you do the same thing.  It’s about controlling the thoughts so you are not controlled by them.”

“But it’s so hard. I just didn’t know anything could hurt this much.”

Irene motioned for Esther to help her sit down. Irene picked up a picket and held it tightly.

“This board is a representation of something sacred. It’s a covenant between you and the Almighty. Take it.”

Esther took the pointed picket. It didn’t look any different than any of the 20 she’d already made a mess of trying to drive in the ground.

“I want you to take great care with this board. Position it straight and true. Carefully take the hammer and tap it in place so it is perfectly positioned. With each tap of your hammer say, ‘I choose to forgive Arnie for …’ and then say exactly what you want to forgive.  It can be simple to begin with, but continue to state that you choose to forgive him.”

For the next hour, Irene sat with her legs crossed head lifted to the heavens as Esther forgave Arnie.

Esther wiped the sweat from her brow. She nodded with pride at the section of fence she had built.

“Good,” Irene said. “So do you think you’re all done forgiving him?”

Esther sighed and hung her head.

“Look at me,” the older woman said as she took her chin in her hands. “This is the place you come to forgive. You’ll have to come here often because forgiveness is a process. Something will happen and you will remember. Your thoughts will start going wild again. I don’t care if it’s in the middle of the night, during a rain storm or snow is a foot deep, you come back out here and drive another stake in the ground.”

“Well, I guess it beats the alternative.”

“Throwing the hammer at Arnie or Leila if she dared come near me.”

It took over a year for Esther to finish her forgiveness fence.  Every time, and there were many times, she started traveling back into the space of frustration, she had grabbed her hammer and some pickets and went out to pound them into place. She had hammered until she felt peace, but always doing it in an orderly fashion.

During that time, Arnie had been the model husband, caring, attentive and yet, not pressuring her to resume their normal relationship. As she saw him earning her trust back her frustration over what had happened eased.

She continued to build her fence and felt the anger subsiding. She was in no hurry to get the work done, though. The fence had become her outlet against a season of rage.

“Esther,” Arnie said as he came in the house that day. “I need your advice.”

“There’s a new receptionist at the office.”

“I really can’t remember, but today as I was going to lunch she started pouring out the story of her broken marriage. She asked if she and I could go out to lunch some time. I wanted your advice.”

Esther looked at Arnie. He was really serious. He wanted her advice.

“Well, it sounds like she needs a friend. Tell her your wife says we’d love to have her come over for supper some evening to talk.”

Esther knew Arnie had turned a corner when the next day he reported  the receptionist again asked if they could go to lunch. When he told her what Esther had suggested, the receptionist seemed offended.

Arnie laughed. Esther smiled. After supper, she went out to the garden. She took out the crooked boards she had driven in the ground more than a year ago and straightened them.

When she finished, she noticed Arnie sitting in a patio chair watching her.

“The fence is perfect now,” he said.

He walked over and knelt down in front of her.  “I believe a whole lot of love went into the building of this fence,” he said.

Looking into her eyes, he added, “Esther, will you forgive me?”

She cocked her head and looked up at him. She knew the moment was right to answer his question from last year. “Yes, Arnie, I choose to forgive you for anything and everything.”

“That wouldn’t have anything to do with this fence would it?”

“It’s a forgiveness fence. It’s finished now, but if I need to, I can always start another.”

“I don’t think that will be necessary.”

“Well, I don’t know. There’s always the matter of your dirty socks.”

Laughter felt good and so did Arnie’s arms pulling her into his embrace.

No time to read? No problem. Sweet Grace: How I Lost 250 Pounds and Stopped Trying to Earn God’s Favor is now available on audiobook through Audible.com. Start your trial membership and get Sweet Grace FREE when you choose it as your first book. Go to the link on Amazon HERE to get started. If you want a preview of the book, subscribe to this website and get a free chapter.