The boy crept silently through the back alley to the elderly lady’s house. It was a small bungalow with overgrown bushes all around. He liked the bushes. Great cover for getting in and out of a house at night, especially a house that wasn’t his. 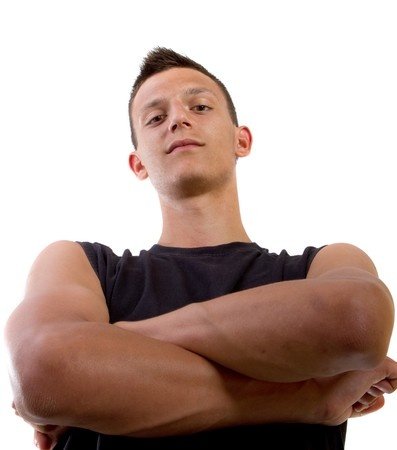 He fingered the gun in his jeans’ pocket. He had been to the old lady’s house just today dressed in his Boy Scout uniform and selling peanut brittle.

She had to ask him several times what he was saying and then to speak up because she was hard of hearing.

He saw where she went to get her purse and noticed several 20’s when she took out the $5 to pay for the candy. He had bought it at Walmart for $1.99.  Already he had made $3 off of her.

Tonight would be the real score, though.

He figured he could gain entrance through the front door.  The purse would be where the old lady got it this morning.  So he’d get that money and then, he’d look around for a few other things before he lazily made his way out of the house.

He got in easy, just like he planned.  Except, he didn’t see her purse in the living room. Maybe she took it to her bedroom.  She probably slept like a log so he’d just peek in and check.  His hand was poised on the door knob when it suddenly swung open.

“Oh my,” she said and grabbed her duster closer around her throat and took two steps back. She was headed to the bathroom.

The boy was surprised, too.  He took several steps back and yelled, “On the floor, Old Lady. I’ve got a gun!” He slowly raised the gun and pointed it at her.

“I…I haven’t been able to get on the floor since I was…well, a long time ago.”

He stuck the gun to her white hair and said it again only louder this time, “I said, ‘On the floor.’”

The old lady seemed to ignore his shouting. Instead, she moved in for a closer look at his face. “Say, aren’t you the nice Boy Scout who was here earlier today?  You know you shouldn’t point guns at people.” She didn’t seem scared of him at all.  Maybe the Boy Scout uniform was carrying things a bit too far.

“Stop it! Stop talking!  On the floor.” He hadn’t counted on such resistance from her.  This was supposed to be easy.

He blew air between his teeth so hard that it rustled the old woman’s white curls.

He couldn’t believe her audacity. She was standing with her back against the wall, but was not making any progress towards the floor.

He put threw his hands up and let out another exasperated sigh. “Look, I don’t got all night here.  What money you got in the house? Where’s your purse?”

“Land’s sake, if money’s all you want, you should have asked in the first place.  I can’t take it with me so you might as well help yourself.  Purse is under the edge of the couch, near my rocking chair. I put it there because did you know there are youngsters, well, like yourself who break in and take things without asking? I keep wondering where their mommas are and why they didn’t teach them some manners.”

The elderly woman had to look up to fix her soft blue eyes on his angry brown ones, but she stared him down none-the-less.  He averted his eyes.

“Young man, you look at me! If you are going to shoot, then shoot.

“I’m 96 years old, but I’m younger than you by the way you are acting.  I ain’t got many days left in this world. I don’t know when the good Lord will call me home, but if it’s today that’s just fine with me.”

Jerking her arm, he pulled her toward a chair that sat at the end of the hall.  “Lady, you are a piece of work.  Of all the houses to rob, I had to choose this one. Now, sit down or I will shoot.”

She stood beside the chair not moving. She was stubborn, that’s a fact.  He hadn’t known too many older people.  No one lived to be that old in his family.  His father was gone long ago. His mother turned tricks all night to make money for her next fix.  His two older brothers had both been killed in shoot-outs; one last year, the other the year before. Even his sister’s husband was killed in a drive-by shooting just last month.  He couldn’t even remember when his uncles had died. No, he had to fend for himself.

“Before you shoot me, I need to ask you one question.”  She didn’t wait for his response.

“If it was me holding the gun on you would you be ready to die?

How did she know that? He looked around to see if there beads or brightly colored silk scarves and a crystal ball. No, all he saw was a big painting of Jesus over the fireplace. The eyes followed him around.  It was creepy.  He shuddered involuntarily.

Alien in a Housecoat

Stepping towards him, she lifted her hands to either side of his face and patted him softly.

“Stop that. What’re ya’ doin’?” he said backing away from her. He didn’t know why he’d even let her touch him.  Still, her touch was nice.  It was a touch of love and tenderness. He couldn’t remember ever feeling that before.

“Why you’re nothing, but a boy,” she said shaking her white curls. “You should have a long life ahead of you. Right now, son, you are living like you’re dying.”

He dropped the gun to his side, shook his head and turned toward the door. This was taking all night. He needed to find another house or something. Where in the world am I anyway?  Star Trek? That’s it. She’s an alien. She’s a green slimy alien with a pink and yellow flowered housecoat and white wig.  He felt like tugging at her hair to see if would come off in his hand.

“Wait a minute, Sonny. Come with me.”

When he didn’t move, she took his hand in her wrinkled one and tugged.  He shook his head and sighed again.

“I won’t bite you. I’m not some kind of alien now, am I?”  She giggled as she saw the shocked expression on his face.

Did she really know what he was thinking? Before he knew it, he was following her.  It was like she had a spell over him or something. He shook his head and wrinkled his nose. He could not get a read on the elderly image in front of him. Was she real? Was he in some weird dream? Had someone slipped him some pills when he wasn’t looking?

She took two steps into her small kitchen.  Then, reaching back behind the bread box, she opened a red teddy bear-shaped cookie jar.  She pulled out several hundred dollar bills and three chocolate chip cookies. How did she know chocolate chip were his favorites?

“I don’t have any need of this money or these cookies,” she said.  “You take them.  And tomorrow, I expect you here mowing my yard.”

The young man sank into one the faded gray vinyl-covered kitchen chairs.

“Why are you doing this?” he said nervously crossing his arms on the table, then uncrossing them and placing one on each knee. His legs jiggled up and down shaking the table.

She didn’t answer right away.  She reached in the ancient icebox and took out a glass bottle of milk and a baggie containing a ham and cheese sandwich.  From the open shelf above the sink, she gently retrieved a delicate glass coffee mug and poured it full of milk. She added a clear glass plate and carefully sat the sandwich in the middle and some chips she pulled from a bag in the pantry around the edge.

“These dishes were my mother’s. I only use them for company.” She placed the food and drink in front of him.

He looked at the meal, back at her and back at the food. She bowed her head.“Thank you, Lord Jesus for bringing this young man here tonight and for the food he is about to consume.

She sat down slowly and watched, savoring his enjoyment. Cookies were a thing of the past for her, but she enjoyed watching the boy eat. She realized he probably hadn’t eaten all day. She was glad she could feed him.

Be Whatever You Want

She waited until he finished. “Sonny, you have a whole lot more living to do. Me? I’m ready to step right on over to heaven and continue the real living up there.  You are young. You can change your ways.

“Go back to school or get your GED.  Then, I’m sure you can get grants and such to pay for some college or other training. You could be whatever you want. You don’t have to live this way.  And you can start reading the good book. It’ll help you know how to live.

Now, let yourself out. And, Sonny…”

“I expect you here by 7 a.m. tomorrow.”  With that she tottered down the hall to her original destination—the bathroom.

He let himself out, scratched his head and stood for a minute trying to decide which direction to go. No one would be home. It was a dreary, scary place anyway. He might get shot before he got there anyway.

The night was warm with a soft breeze blowing.  A welcoming lounge chair yawned on the back patio. He sat down and fell fast asleep.

The next day, she held her breath as the clock in the hallway struck 7.  At three minutes after, she grinned from ear-to-ear.

That lawnmower engine made the sweetest sound on earth.

“I saw a valley where dried out bones were scattered everywhere. And God asked me, ‘Can these bones live again?’ I said, ‘Only You know.’ He said, ‘I will put breath into them and they will come to life.’  Then He commanded, ‘Come breath, breathe into these dead bodies so they may live again.’ And they all came to life and stood up on their feet.” Ezekiel 37: 2, 3, 5, 9, 10  (Paraphrased and condensed)

Question: In what ways were both character’s bones “dry”? How were they both made to live again? In what way does this story challenge you regarding your life? Are you more like the old lady or the young boy? 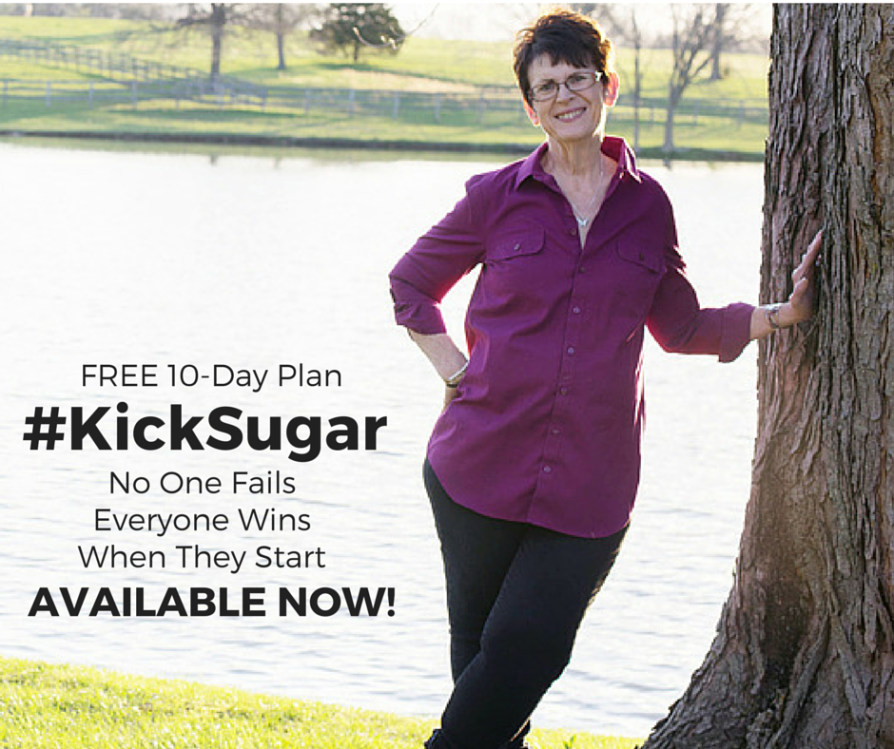 Nothing was a bigger thief in my life than processed sugar. Nothing set me free like giving sugar the heave-ho. So I designed my FREE #KickSugar 10-Day Course as a way for you to begin to get sugar out of your system.  It’s a way to begin really living again, shaking those dry bones awake. #KickSugar is available now. It includes 10 Videos, study guides, recipes, and reflection questions. And just for finishing the course I give you FREE gifts. Get started by putting in your name and email below. And go kick sugar out the door.