Without a vision the people perish.1 With a vision that is too overwhelming and scary they cower in fear and never get started. They do nothing. And the vision perishes.

We are called to be vision keepers no matter how small or humongous the vision seems. If your dream or vision for your future doesn’t scare you, it’s not big enough. 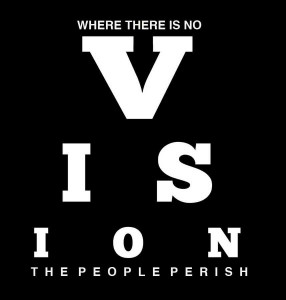 You know that vision, goal or dream you have that looms over you like a giant waiting to pounce.  It keeps you up at night thinking of ways you can accomplish it, but at every turn you feel defeated. You don’t have enough money, education, experience.  You figure it’s better to have no dream rather than be consumed by this goal.

I was like that for years with an overwhelming weight loss goal. After a while it made me just want to stop trying

What do we do with a vision, a dream, a goal that seems unaccomplishable?

We can be like Gideon. He felt defeated and not able accomplish the task asked of him.  It is no accident he was given something he was afraid to tackle.

Fear is a big stumbling block to accomplishing a vision.  Gideon suddenly saw his weakness. Even though the angel told him he was a mighty man of God, he was afraid God had left him, so afraid that he asked for confirmation three times. I think I’ve stopped counting the numbers of times I’ve asked for confirmation. How about you?

It is no accident you and I have been given our pieces of the puzzle, our dreams to accomplish. But in order to do it we will have to step out of our comfort zones and into the chaos. That was certainly true in my case. I had my comfort food and I did not want to give it up. I wanted to have my cake and eat it, too.

I wanted to stay in comfort and not venture into the unknown. What I saw as comfort, though, was really chaos. God wanted to change chaos. That’s why He kept reminding me of the dream.

Even though Moses had numerous objections to what God wanted him to do, he finally decided to take a step into what he knew would be utter chaos. He wasn’t disappointed. When he asked Pharaoh to release the people of Israel and he refused, there were plagues. Since he was there, he had to endure them.

Pharaoh waffled on his decisions agreeing to let the people go and then saying he had changed his mind. Even after he agreed and they had left, he chased them until the Red Sea swallowed him and all his armies. Despite the chaos, the vision was accomplished, though Moses never got to see it through to its completion.

Moses could have run from the vision the first time Pharaoh waffled on his decision. So can you. So can I.

If we do run, we will be like Jonah. The vision will chase us down, swallow us whole and spit us out in a place where we have no choice but to accomplish it. Running only makes accomplishing the vision more time-consuming and difficult. Running is not worth it. I’m sure Jonah would tell you the same thing.


This happened to me. I ran to working and trying harder at ministry and anything to keep from facing what I knew I must do. Running though has it’s consequences. Mine came in the form of health and medical complications. Like Jonah, I was in a whale of a mess!

There’s yet another possibility, you can ignore the vision and it will be given to someone else. The Bible is full of someone elses who took up the vision.

David wasn’t someone else. When someone was needed to fight the giant Goliath, David was innocent enough to believe God would fight the battle for him.

I wonder how many thousands of others in the Israeli army God spoke to first or even at the same time? Only David answered. Only David is the one remembered for the victory. Only David saw the vision.

I tried to ignore what God wanted me to do. But it was pretty impossible because I had to live with it everyday. Some dreams are only yours to accomplish and if you don’t do them, they will go to the grave with you.

The Bible doesn’t tell us how many people refused to accept the vision. That’s because the only ones who matter are those who see it, embrace it and act on it.

Obviously this is the best answer. However, God will use all of the other choices to build our character and develop us until we see that only when we trust in and fully relying on Him will anything begin to happen.

God had shown me for years that my compulsive overeating of processed sugar and gluten-causing items was the reason for my extreme weight gain. This weakness caused me to balloon up to 430 pounds.

When I finally listened to Him and started eating the way I knew He wanted me to, I started losing and keeping the weight off.

Then, I saw another vision come to pass as I began to write a book about the journey I had been on.

I wonder, if I had listened to Him back in my 20’s when I began to gain weight, what kind of dreams and visions would have been accomplished through my life? As it is, I see how He has built my character and strengthened me.

I ran from the dream of losing weight. When I accepted the solution, I ran straight into His arms. I plan on staying here. This is a much better, though sometimes less comfortable, place to be.

Now I see many more visions of things in my future. I’m excited and a bit scared to cooperate with Him. I’ve learned, though, that riding along with God the journey and the vision is much less scary. God knew a big dream would motivate me to do bigger things than I could think or imagine.

I look back now and see how far I’ve come. This morning, my weight loss from my highest was was 263 pounds. Can you imagine? It’s difficult for me to and I lived it. What more is out there? What more can I or you accomplish? More than we can possibly imagine. After all, we have the God of the universe to help us.

“Write the vision, make it plain so that those who read it may run with it.”2

To get your copy of my memoir, Sweet Grace: How I Lost 250 Pounds and Stopped Trying to Earn God’s Favor, go HERE. Be sure to download the free copy of the study guide. Link is on the last page of the book. Enjoy!