Stay In Your Lane

I was just running in the swim lanes at the indoor recreation pool like I usually do every morning. There were several other lanes open so I wasn’t too concerned when a man and woman came and began swimming in the lane adjacent to me. Most of the time two, not three, people share the lane. I thought about getting out when I heard God whisper to me, “Stay in your lane.” 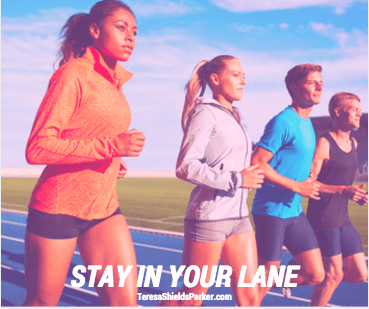 I was puzzled. Wouldn’t it be nicer to get out of the lane so they wouldn’t be crowded?

Again I heard, “Stay in your lane. Stay the course.” My exercise time had been cut short several times that week because I had given in to others who wanted my lane. Mind you, they didn’t kick me out, but when I could clearly see they were waiting I would move and there’d be nothing left to do but stretch some and leave.

This time God was teaching me some kind of lesson. I knew it but it wasn’t real apparent. “Is that You, God, or just me?” I asked.

When both individuals began swimming towards me it clearly seemed I had to move or be rude and knock them out of the way. It did briefly occur to me that perhaps they were the rude ones, but I dismissed it.

I moved out of the swim lanes and did a few stretches. In two minutes they got out and I took my spot back jogging in the lane. God then reminded me, “Stay in your lane.” This time I had no question. I knew it was God because my mind wasn’t even considering getting out.

I figured it would not be a problem any more because they had gone elsewhere, but they came back again. This time, though, I had the sure Word of God and I stayed. They stared at me, walked around me a few times. I noticed they were speaking to each other in a different language. Then they got out, but the woman kept watching me and talking to the man.

I figured they were talking about how rude I was, but I had a surety I was to stay and so I did. I was there my full hour before leaving. As I was leaving an acquaintance came up and told me that the couple were from another country.

“They had never seen anyone run in the water,” she told me. They were impressed and the lady wanted to try it but couldn’t run as fast as you.” She laughed.

What I took as them thinking I was rude was just them wanting to learn how to do the same thing. They were watching me.

We never know who will be watching us. God  does though. He tells us simply to stay in our lane, to keep doing what we were put here to do and not deviate from it.

In the pool it was clear what He was talking about. Stay in the lane I was in, but in life sometimes it’s not so clear. Figuring out where my lane is and how to stay there without allowing everything else around me to push me out for any little issue or problem I encounter is a bit more difficult.

“So take a new grip with your tired hands and strengthen your weak knees. Mark out a straight path for your feet so that those who are weak and lame will not fall but become strong.”1

We are all part of a much bigger plan that God has devised. If we stay in our lane and do what He has put us here to do, great things will happen. If not, we’ll get kicked out by those who just want to watch.

Or we just might help lead someone who really needs to discover where their lane is and how to be comfortable in that space.

What will you do today to make sure you stay in your lane so others can discover where theirs is?